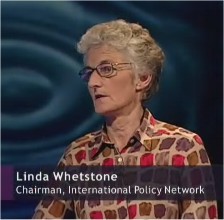 Whetstone is married to Francis Whetstone, a Conservative councillor. She is a 'mother of three'[4], one of whom is Conservative Party operative and corporate spin doctor Rachel Whetstone. A 2001 profile in the Independent reported:

Linda Whetstone is tall, slim and ferociously energetic, a no-nonsense, 58-year-old intellectual; the sort of woman who in her youth would have been described as a bluestocking. She is also past chairman and president of the Conservative Association in Wealden, the third safest Conservative seat in the country... Mrs Whetstone, though chastened, is not bewildered by the trouncing of the Conservatives. She speaks with utter conviction. "We deserved everything we got at the election. We hadn't got any policies. Now we need a leader who appreciates that we wasted the last four years; who is capable of systematically thinking through a philosophy and then developing policies out of it."

This philosophy, she is convinced, must be rooted in the free market. "We could have won the argument on the NHS if only we'd been a bit braver. We have a health service that delivers worse results than almost any other system ­ a 65 per cent survival rate after five years for breast cancer in this country, compared to 86 per cent in most other countries. We wouldn't buy shoes, or holidays, from the Government, so why do we persist in buying from them the two things closest to our hearts ­ health and education?"

"In other areas, we've accepted that private enterprise delivers. Even Sweden, a far more socialist country than ours, uses private money to better effect. Only Canada has a similar system to ours, and that's crap too. We do have to find a way to give choices to the least well-off, to enable them to join in. But there are lots of good ideas for that."

Mrs Whetstone accepts that these views would put her on the right of the party, "although I'm not a hanger and flogger". If Ann Widdecombe were to become leader, she says, "I would be off like a shot." She also diverges from the bulk of Conservatives on the countryside and planning. "Most of them have ideas that are frankly bananas ­ that nimbyish 'not one more brick!' I say to them, 'but nurses can't live in your village. The only people who can are the rich who work in London'."

She despises the Countryside Alliance, and, if she had her way, all farming subsidies would end. "I don't know why the countryside is so resentful of the town, because the town subsidises the countryside more than any sector subsidises any other sector ­ an average of £20 per week for a family of four. What are they paying for? Farming is in its worst state since the 1930s, and it's more heavily subsidised than ever." If Wealden is one of the most beautiful parts of England, then Mrs Whetstone's house must be one of the loveliest parts of Wealden ­ a red-brick 17th century manor house, half covered by a creeper, with leaded windows, its own oasthouse and views over sweeping lawns to the downs.[5]

On 18 August 2008, Whetstone appeared on BBC Newsnight to comment on a long programme about conflict over water scarcity. She presented the neoliberal market view that most of the shortage issues should be dealt with via the market, i.e., charging for the resource, issuing property rights, and removing government interference. Her views were presented to offset those of a NGO analyst in Kenya who suggested that it was up to the state to invest in the provision of public utilities, and that the poor were undeserved and paid more than most city dwellers.[6]