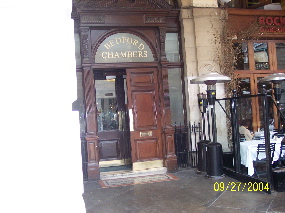 The International Policy Network (IPN) was founded by Antony Fisher in the UK as the International Institute for Economic Research (IIER) in 1971. Fisher went on to found the Atlas Economic Research Foundation in the USA in 1981, and from this point the IIER traded as Atlas Foundation UK. In the USA, the Atlas Foundation provides training and funding to start libertarian think-tanks. Fisher also founded the Institute of Economic Affairs (IEA), a pro-free market think tank based in London. The founding director of IPN, Julian Morris, was previously director of the IEA's Environment and Technology Programme. The IPN is based in an office in Bedford Chambers in King Street, Covent Garden, London.[1]

The Atlas Economic Research Foundation is headquartered in Fairfax, Virginia. Atlas was established with the aim of bringing "freedom to the world" by helping "develop and strengthen a network of market-oriented think tanks that spans the globe".[2]

The organisation changed its name to IPN in 2001, and it expanded its operations with significant corporate funding. Its international co-directors then were Roger Bate and Julian Morris, two people who have spear-headed the pro-corporate, anti-environmental debate for over a decade in the UK, whilst supporting controversial industries. Bate co-founded the European Science and Environment Forum in 1994, which arose from the concept for a pro-biotech / tobacco, chemical industry front group in Europe funded by Philip Morris. He also solicited money of the tobacco industry for a book on risk and smoking, and Julian Morris was a witness for the GM industry Life Sciences Network at the GM Commission in New Zealand. Bate co-directed IPN until 2003.[3] Some unknown industry / industries are now funding ESEF / IPN to counter the environmental movement on a global scale.

In a March 2009 presentation Tim Montgomerie and Matthew Elliott described IPN as part of the infrastructure of the conservative movement in Britain.[4]

On 3 March 2003 IPN and Spiked Online co-sponsored a debate held at PR firm Hill and Knowlton's premises in London on "GM food: should labelling be mandatory?" The seminar was introduced by Greg Conko of the CEI. Tony Gilland of the Institute of Ideas also spoke.[5]

Former DuPont PR man and director of the Scientific Alliance Martin Livermore is an IPN Fellow.[6]

The IPN issued a publication in 2008 considering governments' plans to cap greenhouse gas emissions as ineffective against the threat of climate change and suggesting that it would only exacerbate the global economic crisis. [7]

In a Financial Times blog response to the question, "What do you think the impact will be of US President Barack Obama’s decision to attend the summit at the end of the conference rather than the early stages?", IPN executive director Julian Morris stated that Obama would be "bask[ing] in the associated fanfare [that comes with his Nobel Peace Prize]" and "seek[ing] a new arena in which to enhance his public image"[8]. He then points out that the USA's credentials with regard to a commitment to climate change are not at all good. He explains, "In 1997, prior to the UN climate change conference in Kyoto, the Senate passed a resolution - by 95 votes to 0 - that the US should not be a signatory to any agreement which would seek to limit or reduce the US’s greenhouse gas emissions or result in serious harm to the US economy," before adding that members of Obama's administration - and British and EU officials - are currently, and have been for some months now, urging developing countries to commit to "binding restrictions on greenhouse gas emissions.""[9]

Its website states, "IPN is supported entirely by charitable donations from individuals, foundations and businesses. It receives no money from any government or political parties, and it does no contract work." [10] However IPN North America reportedly received $390,000 from Exxon, including for work on climate change and climate change 'outreach' between 2002 and 2006. [11]

In 2010, IPN along with seven other European think tanks investigated by the Corporate Europe Observatory (CEO) were reported to not be registered, and when asked to disclose their sources of funding for climate activities, provided very little information in response. The CEO did find that IPN was funded by the late Antony Fiaher. Also, one of the IPN's predecessors, Atlas Economic Research Foundation played a role in spreading the web of Koch Industry money to Europe.[12]

When questioned by news agency IPS in 2010, Julian Morris claimed IPN had not received money from corporations or other organisations directly involved in the fossil fuel industry for the previous three years. According to Sourcewatch in 2003 and 2004 about 85 per cent of IPN's funding was from corporations.[13] According to Morris, IPN‘s annual income is around 1.4 million dollars. IPN‘s links with the Atlas Foundation and the Koch web are also clear from its board. Members include John Blundell and Linda Whetstone, the daughter of founder Anthony Whetstone is Chairman of the International Policy Network, sits also in the board of the Institute of Economic Affairs, the Atlas Economic Research Foundation and the Mont Pelerin Society, an international network of neoliberal intellectuals. Bridgett Wagner, head of the IPN US branch is also at the Heritage Foundation, a neoconservative US think tank very active on climate policy, which is funded by ExxonMobil.[14]

According to a Telegraph blog by Alex Singleton, the IPN was formerly (prior to January 2009) a member of the Stockholm Network, but left at an unspecified date.[15]

The UK branch of the IPN is part of the Civil Society Coalition on Climate Change (CSCCC), which in its own words aims to "educate the public about the science and economics of climate change in an impartial manner." [16]