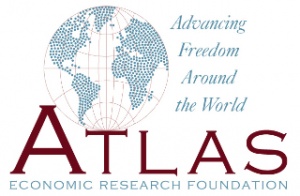 The Atlas Economic Research Foundation (AERF) was founded in 1981 by Antony Fisher. Its vision is: "to achieve a society of free and responsible individuals, based upon private property rights, limited government under the rule of law and the market order". Or in more colourful terms used by John Blundell (president from 1987 to 1990), the mission of Atlas is "... to litter the world with free-market think-tanks."

Atlas promotes international development of free market think tanks and provides support and networking opportunities for existing organizations. Atlas brings "freedom to the world" through workshops, publications, awards, and a global directory of conservative/free market think tanks. Atlas is a member of both the Cooler Heads Coalition and the State Policy Network. Atlas is funded by conservative foundations, including the Sarah Scaife Foundation, Earhart Foundation and the Carthage Foundation

On 2 August 2002, AERF wrote to President Bush, discouraging him from attending the UN Summit on Sustainable Development. Bush did not attend.[1]

Atlas Economic Research Foundation has received $680,000 from Exxon Mobil since 1998.

None of the pages below are available on the internet or in the Internet Archive (because of Robots.txt exclusions)