From Powerbase
(Redirected from Ed Vaizey)
Jump to: navigation, search 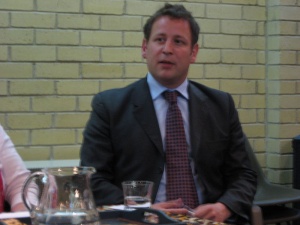 Edward Vaizey is the Conservative Party MP for Wantage and was UK minister for culture, communications and creative industries from 2010-2016. He was a prominent adviser to prime minister David Cameron and a leading UK neo-conservative. His father was the former Labour Party offical, John Vaizey who converted to support Margaret Thatcher in 1980.[1]

According to Vaizey's own website he was 'born in 1968, Ed attended Merton College, Oxford. When he left university, he spent two years working for the Conservative Party’s Research Department, before training and practising as a barrister.'[2]

In July 2014 Vaizey was promoted to minister of state at the Department for Culture, Media and Sport and the Department for Business, Innovation and Skills, with responsibility for digital industries.[3] He retained the position under new Prime Minister Theresa May's cabinet reshuffle.

2006, Volunteering at the King's Arms Project

In August 2006, Vaizey volunteered at the Bedford-based King's Arms Project - a Christian church associated with Newfrontiers International established in 1989 by Tory special adviser and co-founder of the Centre for Social Justice Philippa Stroud.[6] Apparently blogging from his Blackberry, Vaizey writes:

the King's Arms Project, to give it its full title, is a nightshelter, hostel and onward support scheme run by a local church. I'm here at the suggestion of the Centre for Social Justice, to spend a week working, to try and gain a better understanding of the problems faced by the homeless, and by a charity working in this sector.

He described the staff as 'all mainly young, in their early twenties, all are Christian but religion is not on display during the evening'; adding that 'even the homeless think the country's gone to the dogs'.[7]