From Powerbase
Jump to: navigation, search
"I am very critical of democracy. Politics has meant unlimited democracy and unlimited claims on the national income." - Ralph Harris [1]

Harris was born on 10 December 1924. He attended Tottenham Grammar School and Queens’ College, Cambridge. He was a Lecturer in Political Economy at the University of St. Andrews from 1949 to 1956 during which time he twice stood as a Conservative MP, first in 1951 in the constituency of Kirkcaldy, and then in Edinburgh Central in 1955. He was not elected.

In 1956 he joined the Glasgow Herald as its Leader-writer and a year later was appointed director of the Institute of Economic Affairs, libertarian think-tank he founded with Arthur Seldon. From 1980 to 1995 he was a Council Member at the University of Buckingham – Britain’s only private university which was closely affiliated with the IEA - and was a Director of Murdoch's Times Newspapers Holdings Ltd from 1988-2001. [4]

In his obituary the Guardian described Harris as having been, 'the high priest of the libertarian right, whose creed included full-blooded monetarism, the unleashing of market forces, sharp tax cuts, unrestricted Sunday trading, the castration of trade unions and the abolition of minimum wages, nationalised industries and inflation-proof pensions.' [5]

In his autobiography the neoliberal fundamentalist Milton Friedman notes the role that Harris played in finding a television production team for his 1980 neoliberal polemical film Free to Choose:

[We] felt that it was essential that the producer have his heart and not merely his technical skills in the project. In an effort to find such a producer, I called my friend Ralph Harris, the director and one of the founders of the Institute of Economic Affairs, the pre-eminent free-market think tank in Britain. He suggested several possible names and promised to explore these and other possibilities.

Bob had been planning a trip to London to talk to the BBC about its interest in acquiring the program when it was completed and to talk with possible producers. The extra stimulus from Ralph’s encouraging reaction led Bob to take off for London on August 10… By far the most important interview was with Antony Jay, recommended by Ralph Harris as “a Friedman fan” (initially from reading my Playboy interview). Jay was a partner in Video Arts, a television production company formed by ex-BBC employees who had wanted to escape bureaucracy… [Later] Bob and I took off on September 20 for London, where we had extensive discussions with Antony Jay and two of his partners who were to be the most closely involved in the production of Free to Choose, Michael Peacock, managing director and Robert Reid, chairman. In addition, Peacock arranged for us to interview Michael Latham as a potential producer. Unlike the producers we had interviewed in the United States, both the Video Arts trio and Michael Latham were sympathetic to our philosophy and enthusiastic about producing a documentary to present it. [6]

Last night I went to one of Lord Harris of High Cross' 'subversive meetings'. It's a campaign against the anti-smoking campaign. The largest importer in Britain of Havana cigars was there. He says he imports a hundred and fifty million a year. [7]

Harris raised around £100,000 for the right-wing Conservative MP Neil Hamilton to bring a libel action against the BBC over the Panorama programme Maggie's Militant Tendency. The programme, which was based on an official investigation by the Conservative Party, detailed infiltration of the Tory party by rightwing extremists. It was broadcast on 30 January 1984 [8] and provoked a furious reaction from the Tory right-wing. Harris has said: 'I remember at the time Neil came to me and raised the question of financing the libel action. I managed to raise around £100,000, enabling Neil at the time to go after the BBC.' [9] A major donor to the fund was the right-wing financier Sir James Goldsmith. [10] The case came to the High Court in October 1986 and the BBC subsequently settled, [11] according to the BBC Director-General Alasdair Milne because he was instructed to by the Governors. It cost the BBC £50,000 in damages and £250,000 in costs after "the governors instructed me to pull out". [12] This was followed by a Commons motion signed by 100 Tory MPs calling on the Director-General to resign. [13]

In the late 1990s Harris led a network of right-wingers raising money to support for Neil Hamilton, who accused of having received money from the Egyptian businessman Mohamed Al-Fayed in return for asking questions on his behalf in the House of Commons. Harris first appealed for funds to help Hamilton take on Fayed, through a letter to the Daily Telegraph. He worked closely with the far right activist Norris McWhirter. [14] They reportedly raised £410,000 for the fund; [15] £50,000 from the right-wing socialite and columnist Taki Theodoracopulos, [16] and the Earl of Portsmouth said he had made a 'substantial donation'. [17]

Woodrow Wyatt notes in his journal for 14 September 1989:

Went to a party given by Ralph Harris (Lord Harris of High Cross). He is Chairman of IEA (the Institute of Economic Affairs). He instigated many of the policies Mrs Thatcher implemented.

Ralph Harris and his Director of IEA, John Wood, are approaching sixty-five. They thought they would give a party to celebrate their becoming pensionable. I said it wasn't very Thatcher-like to spend the proceeds of your pensions before you have got them. 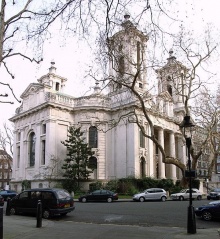 St John's, Smith Square in Westminster where the celebrations were held.

On 20 February 2007 dozens of right-wing activists and friends and relatives of Ralph Harris attended celebration of the life and work of Lord Harris held at St John's, Smith Square, [19] an historic venue in Westminster generally used for classical concerts. Until 2003 Smith Square was the location of Conservative Central Office. Lord North Street, where the IEA is located, runs north off the square, whilst Dean Trench Street runs west adjoining Tufton Street which is a major centre of right-wing think-tanks and lobby groups including Harris’s Centre for Research in Post-Communist Economies.

An excerpt from the film A Conversation with Lord Ralph Harris and Arthur Seldon was shown. The speakers at the event were the Thatcherite Minister Geoffrey Howe, the co-founder of the Centre for Policy Studies Nigel Vinson, the Daily Mail columnist Andrew Alexander, Russell Lewis, Brian Kingham of Reliance Security Group, the journalist John O'Sullivan, Edwin Feulner of the Heritage Foundation, the former MP Neil Hamilton, the libertarian French economist Pascal Salin, the Daily Telegraph journalist Simon Heffer and the Italian libertarian Alberto Mingardi. [20] According to The Times the guests included: