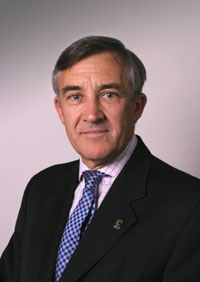 (James) Gerald (Douglas) Howarth (born 12 September 1947) known as Gerald Howarth is a former Conservative Party MP and right-wing operative. In May 2010, he was appointed parliamentary under secretary of state for the Ministry of Defence with the title of Minister for International Security Strategy.[1][2] He left the Government in September 2012.[3] He is a former banker and pro-apartheid campaigner.

In the 2015 general election, Howarth was re-elected with 51 per cent of the vote and a majority of 14,901. [4] He stepped down ahead of the 2017 snap general election called by Theresa May.

Howarth was a member of the Leave Means Leave pro-Brexit lobby group.

Howarth was educated at Haileybury and ISC Junior School in Windsor and Bloxham School in Banbury. He read English at the University of Southampton where he served with the University Air Squadron and was commissioned into the Royal Air Force Volunteer Reserve in 1968. [5]

Since the late 1960s Howarth has been extremely conservative. He supported the American attack on Vietnam, opposed immigration and supported Apartheid in South Africa.

In the late 1960s Howarth became General Secretary of the Society for Individual Freedom, [6] an organisation whose chairman had once called for the repatriation of black immigrants. [7] According to an account later given by an agent of The South African Bureau Of State Security (BOSS): "Most of the people associated with it were eminently respectable, and at least four of them were titled." The author was told by a colleague that: "at least two senior British intelligence operatives are members and it’s almost certainly a British intelligence front organization which is mainly used for disseminating Establishment-type propaganda." [8]

In 1971 Howarth began a career in international banking whilst remaining active in right-wing politics. He worked for Bank of America International Ltd (1971-1977), the European Arab Bank (1977-81) and in 1981 he was appointed Manager, Loan Syndications at Standard Chartered Bank, responsible for arranging major international loans. [9]

From 1973-77 he was the honorary director of Freedom Under Law, an organisation formed to counter the anti-apartheid movement and the boycott campaigns in particular. Francis Bennion, who was also a member of Freedom Under Law, [10] in 1972 had brought a private prosecution against the young Peter Hain for criminal conspiracy in relation to Hain's activities as chairman of the Stop the Seventy Tour Campaign.

In 1975 Howarth and Francis Bennion established a conservative organisation called the Dicey Trust to ‘encourage the rule of law’ through lectures and presentations at schools and colleges. [11] Other members of the Trust included the conservative academic Antony Flew and the Conservative MP Rhodes Boyson. [12]

In 1982 Howarth was elected a member of Hounslow Borough Council and in 1983 was elected Conservative MP for Cannock and Burntwood. [13]

Together with fellow Conservative MP Neil Hamilton, Howarth brought a libel action against the BBC over the Panorama programme, 'Maggie's Militant Tendency'. The case came to the High Court in October 1986 and the BBC subsequently settled, [14] according to the BBC Director-General Alasdair Milne because he was instructed to by the Governors. It cost the BBC £50,000 in damages and £250,000 in costs after "the governors instructed me to pull out". [15] This was followed by a Commons motion signed by 100 Tory MPs calling on the DG to resign. [16]

The libel action was supported by Ralph Harris, director of the right-wing think-tank the Institute of Economic Affairs. Lord Harris has said: 'I remember at the time Neil [Hamilton] came to me and raised the question of financing the libel action. I managed to raise around £100,000, enabling Neil at the time to go after the BBC.' [17] A major donor to the fund was the right-wing financier Sir James Goldsmith. [18]

His first official political appointment was as Parliamentary Private Secretary to Michael Spicer MP, Parliamentary Under-Secretary of State at the Department of Energy (1987-90), then Minister of State for the Department of the Environment (1990-91). He became PPS to Margaret Thatcher from December 1991 to April 1992. Between 1983 and 1992 he was an officer of the Conservative Parliamentary Aviation Committee and was a Founder Member of the No Turning Back group. [19]

In 1993, a year after losing his seat in Staffordshire, Gerald was selected as the candidate for Aldershot where he succeeded Sir Julian Critchley in 1997. Since then, he has served on the Home Affairs Select Committee (1997-2001) and as Vice-Chairman of the Defence Select Committee (2001-03). For a while, he was a member of the Executive of the 1922 Committee of Conservative backbenchers. [20]

In 2002, he was appointed as a Shadow Defence Minister with responsibility for defence procurement and the Royal Air Force. In addition to his frontbench duties he was also Convenor (Chairman) of the all party RAF Group, an officer of the All-Party Parliamentary Aerospace Group, Chairman of the 92 Group of Conservative MPs, and an active member of the All-Party Parliamentary Kashmir Group.[21]

Howarth was appointed a Parliamentary Under Secretary of State at the Ministry of Defence in the incoming coalition government in May 2010.[22] He left the Government in September 2012.[23]

Following the resignation of Liam Fox as Defence Secretary over his links with Adam Werritty in October 2011, Fox's successor Philip Hammond stated that Howarth was one of two junior Ministers who had also met Werritty:

Mr Howarth has met Adam Werritty on three occasions, two of which were large social gatherings. Adam Werritty was also present at a meeting between Mr Howarth and a representative of IRG Ltd regarding information that could be useful to the Department relating to Iraq. The discussion centred on the economic and political landscape in Iraq. No further contact or action has taken place.[24]

The Guardian, reported that the IRG representative was Stephen Crouch:

Fox arranged for Crouch to meet Gerald Howarth, the arms sales minister, and Werritty at the Commons. No civil servants were present at the meeting – an apparent breach of the ministerial code. No record of the 27 September meeting was kept, but the MoD said the three men talked about "the economic and political landscape in Iraq".[25]

"If they don't like our way of life, there is a simple remedy: go to another country, get out. There are plenty of other countries whose way of life would appear to be more conducive to what they aspire to. They would be happy and we would be happy" - Gerald Howarth, 2005 [26]