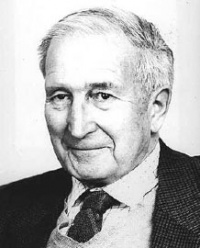 Professor Antony Garrard Newton Flew (born February 11 1923) is a British philosopher who has been connected with a number of right wing publications and think-tanks.

Flew was born in London in 1923, the son of a Methodist minister Rev. Dr R. N. Flew. He was educated at St. Faith's Preparatory School in Cambridge followed by Kingswood School in Bath. [1]

During the Second World War he studied Japanese at the School of Oriental and African Studies, and served as a Royal Air Force intelligence officer. After the war, Flew achieved a first class degree in Literae Humaniores at St John's College, Oxford. He was a graduate student of Gilbert Ryle, and one of the more prominent in a group identified with ordinary language philosophy.

Like many other intellectuals Flew was alarmed by the emergence of the 'New Left' in the 1960s and the trade union activism of the 1970s. He became closely associated with the right's counter offensive and was involved in several think-tanks that emerged from the mid-70s onwards advocating the deregulation of business, the cutting of public services and the curtailment of trade union power, as well as the development of a more repressive state apparatus.

A good example of Flew's hostility to popular movements comes from a letter he wrote to The Observer in May 1963. Following the Campaign for Nuclear Disarmament's march to Aldermaston, The Observer had reported research by National Opinion Polls finding that 57 per cent of the inhabitants of Greater London were in favour of the marchers’ aims. Flew wrote to the paper complaining that respondents were probably not aware of the true aims of CND: ‘They may all too easily have overlooked that what crucially distinguishes the C.N.D. from most of the rest of us, is not as its title suggests, a desire for nuclear disarmament but, what it conceals, that the C.N.D is prepared to have us (and the West as a whole) disarm unilaterally. It is of course, this aspect of the C.N.D which commends it to the Communist World!’ [3]

In 1975 Flew joined a new conservative organisation called the Dicey Trust, named after the influential British constitutional lawyer A. V. Dicey. The group was set up to ‘encourage the rule of law’ through lectures and presentations at schools and colleges. [4] It was set up by, among others, the barrister Francis Bennion and Conservative MP Rhodes Boyson. Aside from Flew, other members of the Trust included Gerald Howarth, who would later become a Conservative MP. Howarth and Bennion were also members of Freedom Under the Law, an organisation first formed to counter the anti-apartheid movements and its boycott campaigns in particular. After the launch of the Dicey Trust, Howarth told the press that he and his collaborators were ‘alarmed at the number of young people who seemed to predominate in movements which were unconstitutional.’ He referred to a ‘steady drip technique being used to threaten the rule of law’ and ‘a systematic attempt to discredit the police.’ [5] The Guardian said the Trust would apply for charitable status and that it hoped to raise £100,000. Another prominent right wing intellectual Max Beloff later became Chairman of the Trust in 1980.

From 1975-1977 Flew was a member of a study group behind a report published in 1977 by the intelligence connected Institute for the Study of Conflict alleging a Marxist penetration into British academia. [6] Considering the ideological orientation of the study group, The Observer commented that: ‘The study group seems to believe with Professor Hayek and his disciple, Sir Keith Joseph, that true liberty is possible only in a capitalist, free market civilisation.’ [7]

The Times reported the report’s findings that: ‘radical minorities...often disagreed with each other, but they had a common distaste, bordering at times upon sheer hatred for the liberal, tolerant society in which they moved.’ [8] The Times published extracts of the report, but also criticised it as having an ‘alarmist tone which goes beyond [the main author's] evidence.’ [9]

During that same period Flew also became involved in a number of influential neoliberal think-tanks which, as Dicey Trust Chairman Max Beloff put it, "undoubtedly helped to make collectivism unrespectable again." [10] Flew was a founder member of the Education Group of the Centre for Policy Studies (founded in 1974), the Council of the Freedom Association (founded in 1975), and the Academic Council of the Adam Smith Institute (founded in 1977). [11]

In the late 1980s Flew became an active vice-president of the Western Goals Institute, a pressure group opposed to immigration and free trade, and supportive of apartheid. Flew was also a committee member of Majority Rights, alongside Ray Honeyford and Tim Janman. He has contributed to Right Now! magazine, the Salisbury Review, and publications of the Libertarian Alliance, the Social Affairs Unit, the Society for Individual Freedom and the Institute of Economic Affairs.

In 1995 Flew authored a report for the Adam Smith Institute criticisng GCSE exams for being too easy, and recommending the reintroduction of O-levels. Flew proposed in the report a '10-point plan' to 'revitalise and lead to vital improvements in the education system.' [12]

Flew is currently a member of the Academic Advisory Council of the right wing think tankCivitas. [13]