The Western Goals Institute (WGI) was an "ultra-conservative"[1] pressure group in Britain, re-formed in 1989 from Western Goals (UK), which originated in 1985 as an offshoot of the U.S. Western Goals Foundation. Its stated intent was anti-communism, although it was also known for its opposition to non-white immigration into Europe and Britain. The Institute and its predecessor were affiliated with the World Anti-Communist League: WGI had sent a delegation to the 22nd WACL Conference in Brussels in July 1990 and from 1991 WGI was the UK chapter of the senior World League. It is said that in 1992 the World League declined to be further associated with the Institute, although the issue is unclear. The group was disbanded in 2001. 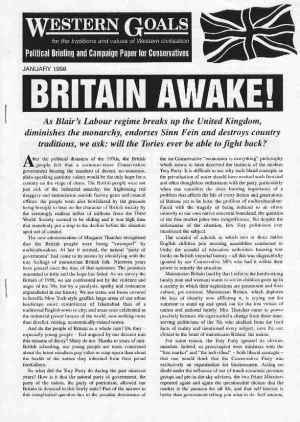 The Institute's stated aims were to "combat the insidious menace of liberalism and Communism within all sectors of British society" [2] and at the same time to create "a powerful international axis of the right". To the latter end, the group forged links with parties such as the Front National of France and the Conservative Party of South Africa.

"Western Goals works to establish networks and links with conservative groups dedicated to the preservation of the cultures and identities of western nations. We are conservatives who believe in traditional conservative values. A multi-cultural society does not work. We wish to protect the way of life we had before immigrants arrived. It was a mistake to permit these people to come here. Politicians must now accept this. Large numbers of immigrants reject European culture and wish to remain alien in religion and culture. We want European culture in European countries. We would seek to have treaties with countries to permit resettlement."[3].

The London magazine City Limits [4] stated that "Western Goals is talking the same blunt authoritarian language as many Tory backbenchers and rank and file Tories. It is a group to be reckoned with ... having a formidable list of honorary patrons and Vice-Presidents".

Western Goals (UK) was a hard-right anti-communist organisation in the United Kingdom. Its activities included campaigning against charities such as Oxfam, War on Want, and Christian Aid which it saw as left-wing, and denouncing as "extremist" left-wing Labour Party candidates. It was founded in May 1985 as the British branch of the American organisation the Western Goals Foundation, with Paul Masson, Stuart Notholt and Andrew Smith, all members of the Young Conservative Monday Club), as its directors. By 1988, Mark Haley was Chairman, and other additional members of the directorate were Michael McCrone, Eleanor Dodd and Gideon Sherman, son of Sir Alfred Sherman.

As a result of their expanding activities, membership and organisation, Western Goals UK was reformed later in 1989, becoming the Western Goals Institute, independent of the U.S. foundation.

Relationship with the Conservative Party

The WGI initially worked towards its goals within the British Conservative Party, in particular via the right-wing Conservative Monday Club with whom it shared some members.

In the late 1980s, WGI's predecessor, Western Goals (UK), had established a parliamentary advisory committee of Conservative MPs which included Sir Patrick Wall, Nicholas Winterton, Neil Hamilton and Bill Walker, as well as Martin Smyth of the Ulster Unionist Party. In 1991, Western Goals was accused in a newspaper report of engineering a "take-over" of the Conservative Monday Club, and there were reports that some veteran members believed the Club had become "more extreme"[5]. Club Political Secretary Gregory Lauder-Frost rejected these claims in a right-of-reply letter published the following week.

In December 1991, after a visit by French right-wing leader Jean-Marie Le Pen at the request of the Institute, its Director Andrew Smith was quoted as saying:

There is scope for a radical right alternative outside the Conservative Party. The Tories have betrayed their principles since Mrs Thatcher fell. With this contact with European leaders we are laying the foundations for a new party.[6].

The possibility of founding a new right-wing party, on the model of Le Pen's Front National, appears to have been abandoned by Smith after the Conservative Party's win in the April 1992 General Election ensured that proportional representation stayed off the political agenda for the foreseeable future. However even at the time, the gradual defection of the parliamentary advisory committee and the decision of the leadership of the Monday Club and associated MPs to stay away from the Le Pen meeting made the prospect unlikely.[7]

In September 1992, Sir Norman Fowler, in an attempt to distance the Conservative Party from the Institute, said that "No one in Western Goals is known by Central Office to belong to our party". This followed the Institute's invitation to Jean-Marie Le Pen, and 31 year-old Italian parliamentary deputy, Alessandra Mussolini, to address fringe meetings at the 1992 Conservative Party conference (although they both were unable to come to Britain and the meetings were subsequently cancelled). The invitation to Miss Mussolini were said to have "caused outrage", and led to calls for a ban on her entering the country [8]. The Institute rejected Fowler's remark, saying that the majority of those associated with the institute held Conservative Party membership.

The Jewish Chronicle reported on 25 September 1992 that Marc Gordon, director of the libertarian International Freedom Foundation urged the Conservative Party to expel members of Western Goals, and in the same newspaper on 2 October, Julian Lewis (now a Member of Parliament, then deputy head of Conservative Central Office's Research Department), said he would strongly advise local associations that Western Goals was hostile to Conservative objectives. The Guardian subsequently accused the WGI of attempting "to infiltrate fascists into the Conservative Party"[9], a claim that the WGI disputed as "rubbish".

WGI supported the continuance of apartheid policies in South Africa, and hosted a visit to the UK, in June 1989, by the hierarchy of the Conservative Party of South Africa, a hard-line breakaway from the National Party of South Africa, including its leader Dr. Andries Treurnicht. A press conference was held for the delegation in a committee room of the House of Lords on 5 June[10]. Conservative Party of South Africa MP Clive Derby-Lewis, then a member of the State President's Council, was made an honorary vice-president of the WGI. Western Goals may have supported the anti-communist cause with more than rhetoric. The United Nations High Commissioner for Refugees (2 July 1993) lists the Western Goals Institute as an "impediment" to the elimination of racial discrimination in South Africa, saying of the Institute that it "claims to be devoted to protecting the Western way of life by offering self-defence training to white South Africans"[11].

In Europe, Western Goals gave their open support to the French Front National, the populist far-right political party led by Jean-Marie Le Pen. On 12 October 1989, WGI hosted a controversial fringe meeting at the Conservative Party Conference in Blackpool, addressed by Front National Member of the European Parliament, Pierre Ceyrac. Western Goals also examined the possibility of links with the hard-right German party The Republicans, which in 1989 had six members in the European Parliament.

On 12 August 1989, a delegation from the Western Goals Institute attended a large anti-communist demonstration at Moln, near Lübeck, where 20,000 people had gathered. It was organized by Die Deutschen Konservativen e.V., which was led by another media personality, Joachim Siegerist, now a parliamentarian in Riga, with whom the WGI had contacts.[7]

The group hosted social events including an Annual Dinner at the Grosvenor Hotel at Victoria on 24 November 1989 when the guest of honour was Kenneth Griffith, who spoke out against non-white Third World immigration into Britain and Europe. On 20 November 1990, they hosted the General Franco Memorial Dinner, commemorating the anniversary of his death. This was also chaired by Baron Sudeley. A WGI notice in The Times stated that the late ruler of Spain was "remembered as a hero against communism".

Western Goals hosted a dinner for Jean-Marie Le Pen and his team at the Charing Cross Hotel in the Strand, London, at the beginning of December 1991 which was widely reported, with an exclusive appearing in The Mail on Sunday on 8 December. There was a large demonstration against the dinner outside the hotel and some damage to property took place, notably the hotel's front doors and surroundings, which were smashed. Western Goals director Andrew Smith later said that "On reflection the Le Pen visit was the zenith and also the beginning of the end".[7]

Negative publicity, the departure from the Directorate of Andrew V.R. Smith (replaced by Stuart Millson) and the end of the Soviet Union, meant that the group's activities diminished. Lack of adequate finance reduced any subsequent campaigning to their occasional policy papers, the glossy newsletter, press releases, and letters to editors. The organisation folded in 2001 following the death of General Sir Walter Walker.