The Adam Smith Institute (ASI) is a Westminster based "free-market" think tank which wants to dismantle the NHS, sack civil servants and council workers and slash income tax. It received Labour government funding of almost £8m in 2003.[1] It is a former member of the Stockholm Network (membership was current in the years 2006-7[2] and 2007-8[3]).

In a March 2009 presentation Tim Montgomerie and Matthew Elliott described ASI as part of the infrastructure of the conservative movement in Britain.[4] 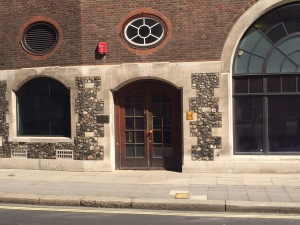 ASI, 23 Great Smith Street, SW1P - opposite the Department for Education and 1 minute from lobbyists PLMR and Central Lobby Consultants

ASI founders and principals, Madsen Pirie, Eamonn Butler and Stuart Butler were students together at University of St Andrews, Scotland. In 1973, they left Scotland to work with Edwin Feulner, who became co-founder of the free-market think tank the Heritage Foundation, in 1973. Edwin J. Feulner is a founder and current President of the Heritage Foundation and was a recipient of the Presidential Citizens Medal in 1989. The Heritage Foundation located in Washington, DC, is widely regarded as one of the world's most influential public policy research institutes.

After their apprenticeship in America, Eamonn Butler and Pirie returned to Scotland in 1977 to found the Adam Smith Institute, set up with the help of Antony Fisher of the Institute of Economic Affairs, one of the British think tanks associated with the Mont Pelerin Society.

In 2004, Baroness Amos described Adam Smith International as "affiliated" with the Adam Smith Institute but financially independent from it:

Baroness Amos's attempt at clarification of the relationship between the Adam Smith Institute and Adam Smith International came in answer to a question to the government in the House of Lords from Baroness Northover, as to:

the Department for International Development awarded three contracts to the Adam Smith Institute worth a total of £7.7 million in the past financial year. Each was awarded following open international competition on the basis of published evaluation criteria.[10]

The work that has been carried out is significant. The three contracts awarded last year included one for support services for public enterprise restructuring in South Africa; one in Afghanistan to provide support in capacity building for the Ministry of Finance and the central bank; and one in the Kyrgyz Republic for pilot training and capacity building in international waterhouse law. There is a range of projects.[11]

In 2008 Michael Foster stated that DfID "had not awarded any contracts to the Adam Smith Institute in the last five years. However, we have issued a number of contracts to Adam Smith International Ltd., which is a separate, self-financing commercial organisation".[12]

In 1993 the Guardian reported:

The Institute itself stays relatively lean. 'Not more than eight full timers' was the plan and it has been kept to. But work has been done by 300 outside contractors, a long list of professors, and one pamphlet from an unknown Michael Portillo. The funding is unsinister, a budget of £350,000, just under half coming from sales of publications and quite profitable conferences: the rest from business. However, no one gives 10% of the total. What if they got such an offer? "No one turns away money, but we'd try to have it spread over a number of years." The Institute is now approached by civil servants, and is busily thinking strategically across Eastern Europe. Its director admired the prime minister, and that matters to Major.[13]

According to George Monbiot, writing in 2005, the British Government had been paying ASI up to £9m a year to oversee privatisation programmes in developing countries.[14] In the six years alone till 2004, ASI's consultancy arm received $34m from the UK aid budget.[15]

According to a previous article by George Monbiot in The Guardian, in 2004, Britain's Department for International Development (DFID) gave ASI £6.3 million for "public sector reform" in South Africa. The Institute has also been given "its own budget - £5m of British aid money - to disburse as it pleases". This lets DFID generate "the support it likes for privatization and public-private partnerships, while avoiding direct responsibility for the decisions the institute makes". In this, Monbiot says, DFID is clearly breaking the law since the International Development Act forbids it from spending money for any purpose other than the elimination of poverty, not to mention the rules forbidding it to "link aid money to deals for specific British businesses".[16]

The "implementation secretariat" for the Indian State of Andhra Pradesh's privatization program, funded by DFID and overseeing the privatization of the state's power sector, was also being run by ASI at the British Government's insistence with the money, once again, coming out of Britain's foreign aid budget.

ASI is a fierce critic of the NHS, which it describes as "centralized tax-funded monopoly". Instead it argues that the UK should "shift the balance of healthcare spending away from tax and more to the individual." At the same time, it says "we need to transform today’s state monopoly providers into independent, competitive ones" - ie private for-profit healthcare providers.[17]

ASI hosts regular events in the Cholmondeley Room of the House of Lords for 'senior people from the private, public and third sectors' in healthcare to 'network with leaders in the sector'. Held in conjunction with LCS International Consulting, these events have featured organisations such as McKinsey & Company, Deloitte and Optum, health ministers and former ministers, and members of the Lords, such as Norman Warner and Tim Clement-Jones.[21]

The British government has funded ASI's affiliated company Adam Smith International with millions of pounds for various "consulting" activities around the world, and it certainly is curious that a Labour government would pass many such contracts to an avowedly right-wing/neoliberal institution. House of Commons hearings in January 2004 revealed substantial funding for its international operations.

The ASI published a report recently called 'Privatisation Reviving the Momentum'[23]. In it they argue for a return to the vigorous pursuit of privatisation. Targets include Scottish Water, Northern Irish Water Glas Cymru, Royal Mail, Channel 4 and BBC Worldwide. The author, Nigel Hawkins is a senior fellow at the Adam Smith Institute, he is also an investment banker in the City of London.

In his 2012 book Think Tank: The Story of the Adam Smith Institute, Madsen Pirie describes how 'it helped very much in our early days to have people in the media who broadly shared our agenda'[24]. The ASI's media friends are listed as being John O'Sullivan of The Telegraph and The Times, Derrick Hill, Peter Hennessey, and Edward Pearce. Sir James Goldsmith's Now magazine is also described by Pirie as being 'invaluable'[25].

Adam Smith Institute articles were offered to the press and the Daily Mail printed them enthusiastically, the paper's editor David English and features editor Mac Keene would help the ASI develop their papers. The Daily Mail and Now magazine both paid the ASI 'particularly well' for producing articles for them.[26] Pirie also worked part time as a relief leader writer for the Daily Mail.[27].

ASI specifically targets youth through its "seminar on the Open Society" where school students are indoctrinated in "free-market" ideas. The Next Generation meeting is another forum to get 18 to 33-year-olds together.

ASI's blog gets over 3,000 hits a day and according to the Daily Telegraph, their "most refreshing commentary on policy" is read by all political parties. They also issue a regular email bulletin to subscibers detailing their current preoccupations. These tend to be informal in tone at the level of "all politicians are useless" (as the issue of 1/8/2007 concludes - which could be seen as slightly ungrateful considering the level of funding noted above).