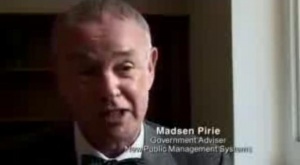 Madsen Pirie in Adam Curtis's 2007 documentary The Trap: What Happened to Our Dream of Freedom. Pirie describes the neoliberal reforms of the public sector as releasing people's creativity and creating pride in their targets.

Dr (Duncan) Madsen Pirie is President of the Adam Smith Institute, and was one of the Institute's three founders in 1977. Pirie is a graduate of the universities of Edinburgh, St Andrews and Pembroke College Cambridge. Following this Pirie moved to the United States where he worked for the House of Representatives in Washington DC, and was Distinguished Visiting Professor of Logic and Philosophy at Hillsdale College in Michigan.

At the Institute, Pirie was part of the team which pioneered privatisation and the extension of the market. His work in helping to develop the Citizen's Charter led to his appointment to the Prime Minister's Advisory Panel from 1991-1995.

Dr Madsen Pirie invited me out once, in about 1982: "Come and meet the next Prime Minister". The other guest was an obscure East Anglian backbencher convinced, from the number of electric mains being set up for industrial estates in his constituency, that that recession was coming to an end. Though, as the MP - a Mr John Major - said, they tended to be slightly ahead of the national trend in Huntingdon.

Respect for the prophet Pirie has to be very high. And if the same prophet is to be found writing in the Spectator that John Major has been a better free-marketeer than Thatcher, willing to privatise the Royal Mail about which she was royalistically sentimental, one should respond with respect. The same Madsen Pirie did also say in 1981 that the Tories would win the next election and the one after that. In the debris of the 14 city riots which networked out of Brixton, this was a distinctly eccentric view. Madsen Pirie was widely deemed an eccentric, if lovable, person. "That fruitcake,"said Chris Patten, not unkindly, though Pirie was hurt and long remembered the remark very personally.

Subsequently, as co-director of the Adam Smith Institute and co-ordinator of the Omega project, he made as large a contribution as anyone has to the underlying thinking of the Conservative governments which have ruled us. The Dr Pirie who prizes Major as a privatiser has himself stood in relation to the public sector like Alaric to the Central European plain. Airports, energy, post office, rail: you name it, he has called for its privatisation when the idea seemed absurd to Conservatives. [1]

The business corporation... is one of the most benign institutions ever created by humankind. Men and women have banded together and risked some of their wealth to create new wealth. In the process they have generated employment, trade and opportunity. They have not usually done this by theft and trickery, but by offering people goods and services they will freely pay for. In doing so many of them have made themselves richer, but they have made humankind richer still.

At the heart of this dislike of business is a complete misunderstanding of how it works. There is a primitive and naive view that one person can only get rich at someone else’s expense, and that if a business is making money, someone else must be losing it. This “zero sum game” fallacy completely misses the point, which is that business activity creates wealth instead of just redistributing it. [2]

It is business, not pious posturing, that is making poverty history. Hilary Benn, the Secretary of State for International Development, criticised the anti-business rhetoric of some of the more vociferous campaigners, saying: “This is not in the interests of poor people.” He is completely correct. It is not, but business is. We should salute the achievements of business, rather than allow anti-capitalist campaigners to demonise them.[3]

Pirie is author of several books including How to Win Every Argument, The Book of the Fallacy, Micropolitics, Privatisation in Theory and Practice and Blueprint for a Revolution. With his colleague Dr. Eamonn Butler, he has co- authored a series of books on IQ, including The Sherlock Holmes IQ Book.