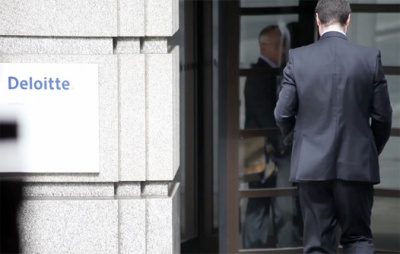 Deloitte Touche Tohmatsu International - Deloitte - is an organisation of member firms around the world in accounting and financial and risk consultancy. Member firms offer services in audit, tax, consulting and financial advisory through a global client services strategy executed locally in nearly 140 countries.[1] The parent group is Deloitte Touche Tohmatsu.

Just four accounting firms – PricewaterhouseCoopers, KPMG, Deloitte & Touche and Ernst & Young – audit 97 per cent of FTSE 350 companies[2] and 99 per cent of the FTSE 100 on the London Stock Exchange. [3] In February 2013 all four firms were criticised by the UK Competition Commission for being "insufficiently independent" of the City.

Deloitte's clients include firms facing intense public backlash and scrutiny over tax avoidance allegations, such as Vodafone and Starbucks.

The Big Four accountancy firms were behind almost half of all known [tax] avoidance schemes, the Revenue (HMRC) said in 2006.[4]

PAC committee chair Margaret Hodge said the accountancy firms' actions represented a "ridiculous conflict of interest". She called for the Treasury to stop accepting their staff to draw up new tax laws. "The large accountancy firms are in a powerful position in the tax world and have an unhealthily cosy relationship with government," she said. [5]

During the UK Coalition government the 'big four' firms have contributed almost £2.5 million to Britain's three main political parties. As of April 2015, Deloitte had contributed £269,320. The contributions are listed as 'non-cash donations', representing the value of staff costs and services (secondments) such as consultancy or advisory and are provided to the party free of charge. Of the £2.5 million from the 'big four', the Labour Party received £1.5 million and the Liberal Democrats received £742,362.

In the three years to July 2012 Deloitte gave £435,034 in staff costs and consultancy services to the Conservative Party and £13,500 to Labour, according to the Bureau of Investigative Journalism. Deloitte said:

It is Deloitte’s policy not to give cash contributions to any political party or other groups with a political agenda. However, we do seek to develop and maintain constructive and balanced relationships with each of the main political parties and may make available staff and adviser resources, and technical and factual information on occasion. [7]

In late May 2013 it emerged that the Advisory Committee on Business Appointments (Acoba) and David Cameron had approved Deloitte's appointment of Dave Hartnett, the former head of UK's tax office HMRC for a one-day-a-week consultancy position. Hartnett had come under pressure over his 'sweetheart deals' with Deloitte client Vodafone which saw the firm pay only £1.25billion of an estimated £6billion due (a figure disputed by Vodafone).

A spokesman for Deloitte told The Guardian:

Dave Hartnett will work as a consultant to Deloitte advising foreign governments and tax administrations, primarily in the developing world. He has significant experience in advising such countries on the development of effective tax regimes, necessary to ensure their continued economic growth. He will not work with UK companies or with HMRC. [8]

UK Govt should stop "playing to the gallery" on corporate tax

In August 2013 the head of Deloitte UK, David Sproul, made the claim that various companies advised by Deloitte had put on hold their plans to move operations to the UK because of the UK government's 'mixed messages' on tax. His comments in an interview with the Telegraph newspaper came on the same day the government launched its consultation on proposals for hefty fines of up to £1million for 'cowboy' promoters of high-risk tax avoidance schemes.

Sproul argued that the House of Commons Public Accounts Committee’s (PAC) high-profile attempt to 'determine what the fair share of tax is' for large firms, for example Starbucks and Amazon, had prompted a 'pause in some firms' thinking, despite recent tax changes favouring the corporate world including a 20 per cent cut in corporate taxation by 2015, and changes to the controlled foreign company rules. Sproul explained that:

They look at the PAC, they look at some of the media, and interpret that as lack of certainty,” he continued. If you’re in America, you would think that this Margaret Hodge [chairman of the PAC] seems to be setting the law.

It does require the Government to be more consistent, so if they want to attract big business here, and they want to use a competitive tax regime as one of the planks of that attractiveness, then they need to deliver on that consistently and not frankly be playing to the gallery at times, and stop playing off the PAC arguments. [9]

In July 2013 Deloitte 'lost an appeal over a regulatory ruling that it failed to manage conflicts of interest in its advice to MG Rover Group and the "Phoenix Four" directors who bought the UK carmaker before it collapsed'.

One of four corporate sponsors of the high-profile Shale UK conference held March 2014 in London, organised on behalf of The Geological Society.