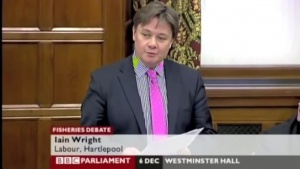 Iain Wright is a British Labour Party politician who was elected MP for Hartlepool in the by-election of September 2004, succeeding Peter Mandelson when he left Parliament to become a European Commissioner.

In October 2011 Wright was appointed Shadow Minister for Competitiveness and Enterprise. [1]

In June 2015 he was elected chair of the House of Commons Select Committee Business, Innovation & Skills.

Wright's constituency includes one oil and gas licence blocks, awarded to Third Energy by the Oil and Gas Authority under the 14th licensing round in 2015. There are no plans or applications currently underway. [3]

Iain Wright has an inconsistent voting record on fracking. [4]