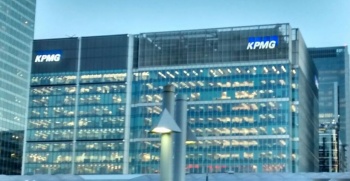 KPMG HQ, 15 Canada Square - next to banks HSBC and Barclays

KPMG is one of the world's largest professional services networks and is considered one of the 'Big Four' accountancy firms. In the UK it has over 12,000 partners and staff working in 22 offices across the country.[1] 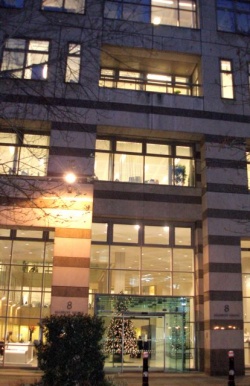 KPMG, 8 Salisbury Square, London, EC4Y 8BB (just off Fleet Street and next to The Office of Fair Trading)

Globally, KPMG operates in 155 countries and has 162,000 professionals working in member firms.

Secondments to the UK Treasury

In 2013 a report by the influential UK Commons public accounts committee (PAC) found that the Big Four were using knowledge gained from staff seconded to the Treasury "to help wealthy clients avoid paying UK taxes". The firms, it said, went on to "advise multinationals and individuals on how to exploit loopholes around legislation they had helped to write".

PAC committee chair and former Labour minister Margaret Hodge said the accountancy firms' actions represented a "ridiculous conflict of interest". She called for the Treasury to stop accepting their staff to draw up new tax laws. "The large accountancy firms are in a powerful position in the tax world and have an unhealthily cosy relationship with government," she said.[4]

During the UK Coalition government the 'big four' firms have contributed almost £2.5 million to Britain's three main political parties. As of April 2015, KPMG had contributed £561,763. The contributions are listed as 'non-cash donations', representing the value of staff costs and services (secondments) such as consultancy or advisory and are provided to the party free of charge. Of the £2.5 million from the 'big four', the Labour Party received £1.5 million and the Liberal Democrats received £742,362.

The Big Four accountancy firms were behind almost half of all known tax avoidance schemes, the UK's HMRC said in 2006.[6]

Prem Sikka, Professor of Accounting at the University of Essex writes:

"With the aid of accountancy firms, numerous corporate transactions are manufactured for the purpose of avoiding taxes. KPMG has admitted selling "unlawful" tax avoidance schemes that effectively deprived US public funds of billions of dollars. The firm has been fined nearly $500m as a result. Several of its ex-partners face the prospect of criminal prosecutions.

"The same firms also peddle a range of avoidance schemes in the UK, which are estimated to cost the state £100bn each year in possible tax revenues. KPMG developed a VAT avoidance scheme for a company operating 127 amusement arcades in the UK... The scheme increased the firm's earnings by about £4.2m - about the amount needed to provide 2,500 NHS hip replacements. The ensuing court hearing learned that, in common with its US practices, KPMG cold-called the amusement arcade operator to sell the scheme. The firm produced a 16-page booklet that listed 83 detailed steps necessary to make it work. The firm suspected that Customs might regard the scheme as "unacceptable tax avoidance", but nevertheless sold it. Following a UK court defeat, KPMG and its client took the case to the European court of justice. A preliminary decision by the EU advocate-general has declared the scheme to be "unacceptable"."[7] [8][9]

Representation in the European Commission

Georges Bock, managing partner of KPMG Luxembourg, and Gérard Laures, partner at KPMG Luxembourg, represent The Association of the Luxembourg Fund Industry and Kevin Charlton, tax director at KPMG, represents The Alternative Investment Management Association on the European Commission's Expert Group on automatic exchange of financial account information. The aim of the group is to assist the EU member states on tax laws and collecting the full amount of tax owed to them.[10]

In 2010 KPMG ranked equal first with PwC in the top ten companies providing hospitality to senior UK civil servants: both did so on 72 occasions.[11]

In 2015 NHS England announced a new list of approved suppliers to the NHS. The list is dominated by outsourcing giants Capita; management consultancies PwC and KPMG; and US health insurer UnitedHealth. NHS England insists the companies who are bidding for contracts to supply support services to the GP-led commission groups will supply a range of back office functions, cutting procurement times and allowing doctors to focus on how best to spend their £70bn share of the NHS budget.' All of the firms are members of the Commissioning Support Industry Group, a 'low-profile body that affords them regular access to the senior NHS officials overseeing the creation of the new market in commissioning services.' Other members of the Group include management firms Ernst and Young and McKinsey who have also been awarded prominent roles.[12]

Jacqui Smith, former Labour home secretary became a consultant in October 2010, six months after leaving politics, a position that was cleared by the Advisory Committee on Business Appointments. She held this until June 2011. [13] According to the Daily Mail, KPMG had "won an important government contract while Smith was Home Secretary when it was commissioned to carry out a major study into whether drink industry giants were breaking guidelines on the sale of alcohol". [14] Smith has been chair of public affairs at lobbying firm Westbourne Communications since 2015.

In February 2016 it emerged that the Scottish National Party government had given a contract to KPMG to carry out research into the economic impacts of shale gas, following a competitive tender process. Scotland has had a moratorium on shale gas exploration since 2015; the results of this research were due after the Scottish elections. [15]

KPMG published this report in November 2016. Entitled, the 'Economic Impact Assessment and Scenario Development of Unconventional Oil and Gas' it revealed that,'If oil and gas prices were to remain at historically low levels, it would be unlikely that unconventional oil and gas resources could be developed economically.'

Full summary of the report:

'The aim of this project was to better understand the potential aggregate impact of unconventional oil and gas development on the Scottish economy under a range of scenarios and consider key sectors and groups that are likely to be affected by each scenario. Three potential production scenarios were developed by undertaking a study of the existing evidence base, including estimates of potential UOG resources, and through discussions with stakeholders and by making number of assumptions including that each scenario was developed on the basis that exploration is successful. In the mid-range scenario it is estimated that the development of 20 well pads of 15 wells each could produce a cumulative 947 billion cubic feet of gas and 17.8 million barrels of associated liquids over the lifecycle to 2062. This could lead to direct expenditure of £2.2 billion in Scotland over the period, which could give supply chain benefits and other induced economic benefits of an additional £1.2 billion over the period and be responsible for the creation of up to 1,400 jobs at its peak in the Scottish economy. While not quantified in the study, the report highlighted a number of other potential economic considerations, including the use of gas as feedstock in the petrochemical industry, the impact on local house prices, road use, agriculture, visual amenity, environmental costs and health costs.' [16]

In 2011 KPMG won The Society of Trust and Estate Practitioners (STEP) award for Accountancy Team of the Year. [19]

The register of consultant lobbyists documents those clients on behalf of whom KPMG has met with government ministers. Their listings since registering in June 2015 are as follows: