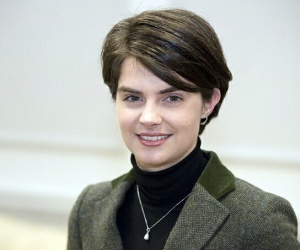 Chloe Smith (born 17 May 1982) was Economic Secretary to the Treasury from 2011 until a reshuffle in September 2012 saw her moved to the Cabinet Office.[1] As the Minister for Political and Constitutional Reform, she had responsibility for overseeing the Government's preparation of a statutory lobbying register. Smith left the Government in October 2013.[2]

Smith was elected Conservative Party MP for Norwich North at a 2009 by-election following the resignation of Labour MP Ian Gibson after the MPs' expenses scandal. She retained the seat on new boundaries at the 2010 general election.[3] In the 2015 election, she was re-elected with a majority of 4,463. [4]

Since May 2015, Smith has been the parliamentary private secretary to the chairman of the Conservative Party Lord Feldman.[5]

After graduating from York University Smith joined Deloitte Touche Tohmatsu, where as a management consultant she advised private businesses, government departments and public bodies, which according to her website gave her "a lot of valuable experience". [6]

In her gap year Smith worked for former Conservative education secretary Gillian Shepherd, whom she describes as a "real mentor". She also worked for former Conservative vice chairman Bernard Jenkin.[6] Smith was appointed an assistant Government Whip in 2010.[7] She replaced Justine Greening as the Economic Secretary to the Treasury on 14 October 2011, in the reshuffle following Liam Fox's resignation from the Government.[8]

Smith has has received more than £30,000 in either donations or IT support from Norwich based IT firm The Computer Service Centre, including a donation of £14,656.62 in February 2014.[9]

Smith said: 'Donations to my campaign are all clearly recorded and available for scrutiny as per the law. They are all from people who agree that I’m a good MP for Norwich North and who want to support me and the Conservative Party winning the next election. I spend the money raised on communicating with people in Norwich North. For example, printing a leaflet to deliver to every home, or running a website, or renting an office, costs money. I do my job by being in touch and you can’t achieve speaking to 65,000 people on fresh air alone.

'There’s no consensus on if or how to change the ways that candidates gain campaign support. The taxpayer should not be asked to pay for political party work. Meanwhile Labour wants to protect the fortune it gets from the trade unions, who hold influence over Ed Miliband in return and would take Britain back to the 1970s.'[10]

In October 2015, Smith signed a letter in The Guardian along with more than 150 people drawn from the arts and politics. The letter launched Culture for Coexistence, an organisation that opposes the Boycott, Divestment and Sanctions movement.[11]