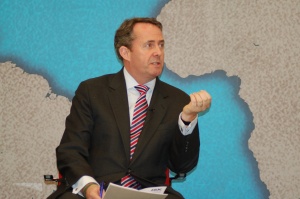 Liam Fox was the British Conservative Party Secretary of State for International Trade until he was sacked by the incoming prime minister Boris Johnson in June 2019. He was first appointed to the role in July 2016 by Prime Minister Theresa May.[1]

He was previously UK Defence Secretary from 2010-2011 but was forced to resign in October 2011 amid the controversy over his friend and unofficial adviser businessman Adam Werritty[2] accompanying him on several trips to key UK arms markets. Werrity did not work for the government and had no security clearance to be involved in ministerial business.

Fox has been the Conservative Party MP for North Somerset since 2010. In the 2015 election, Fox retained his seat with a majority of 23,099.

As international trade secretary, Liam Fox has said he will “personally lead on helping the defence and security industries to export and will be involved in the most significant global deals across all sectors”. Half of his new secondees in the Department of International Trade have been transferred from the private arms industry. [3]

In September 2005 Fox received £10,000.00 from the chairman of the The Utility Warehouse and son of Basil Wigoder - the former chairman of the Liberal Party, Charles Wigoder.