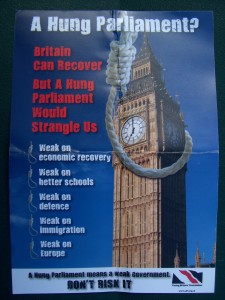 A leaflet distributed in the UK by the Young Britons' Foundation at the time of the 2010 General election.

The Young Britons’ Foundation was co-founded in July 2003 by Donal Blaney, Greg Smith and Ben Pickering.[1]

The Young Britons’ Foundation was entirely inspired by the success, drive and spirit of the American conservative movement.

First introduced to organisations such as the American Conservative Union, the Young America’s Foundation, the Leadership Institute, Collegiate Network and the Heritage Foundation at the annual Conservative Political Action Conference (CPAC), it was clear to co-founder Donal Blaney and Greg Smith that Britain was behind in the training and development of younger political activists.[2]

Other details of known funding are in the table below:

The line up of speakers for YBF's 10th Activist Training Conference at Churchill College, Cambridge University on 13 - 15 December 2013 was:

The weekend of events, including 'a private viewing of the Churchill and Thatcher archives' takes place under the Chatham House Rule.[7]