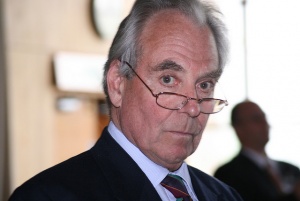 Malcolm Everard MacLaren Pearson, Baron Pearson of Rannoch (born 20 July 1942) is a businessman and UKIP member of the House of Lords.

Educated at Eton College, Pearson is chairman of the Pearson Webb Springbett (PWS) Group of reinsurance brokers, which he founded in 1964. He was made a life peer on 18 June 1990 as Baron Pearson of Rannoch, of Bridge of Gaur in the District of Perth and Kinross, sitting as a Conservative.

Pearson is a eurosceptic of long standing. [1] In May 2004, he called for voters to back the UK Independence Party (UKIP). Along with three other Conservative peers, he was then expelled by the Conservative Party on 30 May. He subsequently said that he would probably sit as an "independent Conservative". He threatened to quit the Tories to join UKIP, which he did on 7 January 2007[2], along with Leopold Verney, (21st Baron Willoughby de Broke)[3] He criticised the Tory party's leadership for being "silly" and argued that they should try to get UKIP members back into the fold by adopting more anti-European Union policies themselves. He has tabled a number of unsuccessful Private Member's Bills in the House of Lords demanding Britain's immediate withdrawal from the European Union. In November 2006 he tabled the European Union (Implications of Withdrawal) Bill 2006-07 [4]which calls for the establishment of a Committee of Inquiry into the implications of UK withdrawal from the European Union. Also, he joined the United Kingdom Independence Party sometime afterwards, citing David Cameron's refusal to tell the British people about the disadvantages they suffer because Britain is a member of the EU.

He is one of the co-founders of an anti-EU think-tank, Global Britain, which has campaigned against alleged pro-EU bias at the BBC. [5] Others include UKIP donor Patrick Barbour.

He is a strong supporter of the pro-hunting Countryside Alliance, serving as chairman of its deerstalking committee.

In February 2009, Baron Pearson further courted controversy when he and right-wing cross-bencher Baroness Cox invited Dutch Freedom Party leader Geert Wilders to show the anti-Islam film Fitna before the House of Lords[6]. However, Wilders was prevented from entering the UK on the instructions of Home Secretary Jacqui Smith. [7] In response, Pearson and Cox accused the Government of "appeasing" militant Islam. [8]Geert Wilders appealed successfully against his exclusion, and the film was eventually shown in the Lords in 2010. [9]

{{#ev:youtube|https://www.youtube.com/watch?v=Vlv3KNJ446g%7C250%7Cright%7C"Lord Pearson speaking at the Free Speech Summit, 5 May 2009"}} Pearson attended the 2009 Washington D.C. conference 'International Legal Conference on Freedom of Speech and Religion', organised by the International Civil Liberties Alliance (ICLA), a prominent organisation in the counterjihad movement. Well-known American anti-Muslim activists Pamela Geller and Robert Spencer, who were later banned from entering the UK by the Home Secretary, also attended.[10]

Lord Pearson was invited to speak at the ‘Defeat Jihad’ summit on 10th February 2015, organised by Frank Gaffney’s CSP. Speakers at the summit also included Ted Cruz, several Republican Congressman, IFPS chair Lars Hedegaard, and de facto representatives of far-right European parties in the European Parliament such as the PVV’s Geert Wilders. The summit gathered together many of the same figures it had hosted in 2009. Of the summit, Nafeez Ahmed wrote:

'The consolidation of trans-Atlantic ties between US self-styled counterjihadists, European neo-Nazis and Kremlin neo-fascists is thus part of a mutual effort to leverage the reigns of government across the US and Europe.' [9] Nafeez Ahmed, A Fourth Reich is rising across Europe — with ties to Donald Trump and Vladimir Putin, Medium, June 22 2016. Accessed 05 October 2016. </ref>

{{#ev:youtube|https://www.youtube.com/watch?v=5bjks3fmajM%7C300%7Cright%7C"Lord Pearson in an interview with former EDL leader Stephen Lennon, March 2018 at the Houses of Parliament"}}In March 2018 Lord Pearson was strongly criticised for having invited former English Defense League and Pegida leader Stephen Yaxley-Lennon aka Tommy Robinson to do an interview with him at the Houses of Parliament. Lennon now works with the far right online platform Rebel Media [11]

On Islam and Muslim communities in the UK

To ask Her Majesty’s Government whether, as part of their anti-terrorism strategy, they will encourage leaders of the UK's Muslim communities to identify, confront and expose their violent co-religionists. [12]

'To ask Her Majesty’s Government whether, as part of their strategy against Islamic terrorism, they will encourage United Kingdom Muslim leaders to re-examine the Muslim tenet of abrogation.'

'My Lords, I thank the noble Baroness for that reply, which was helpful as far as it went. I should explain that Islamic abrogation holds that the Koran’s later, violent verses, of which there are many, take precedence over the earlier, peaceful verses, and so it lends support to the jihadists. Have the Government noticed that we can say what we like about any other religion, but we get...' [14]

Speaking at Free Speech summit, May 2009