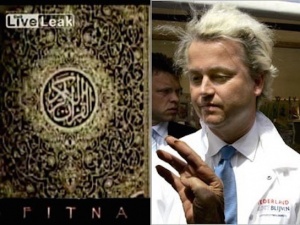 Fitna is a 2008 short film by Dutch parliamentarian Geert Wilders. Approximately 17 minutes in length, the film shows selected excerpts from Suras of the Qur'an, interspersed with media extracts and newspaper clippings showing or describing acts of violence and/or hatred by Muslims. The film, which mixed images of terrorism and violence with Koranic verses, ends with an image of the Koran and the sound of tearing paper. Subtitles explain that the sound was made with a phone book and that it is up to Muslims themselves to remove the offending verses from the Koran.[1] The film has been accused of encouraging hatred against Muslims or Islamophobia. The Dutch authorities examined whether Wilders should be charged with inciting hatred in relation too the film and other public statements. In deciding not to prosecute, the authorities nevertheless indicated that in their view the film insults Muslims:

The fact that statements are hurtful and offensive to a large number of Muslims does not necessarily mean that such statements are punishable. It is true that some statements insult Muslims, but these were made in the context of public debate, which means that the statements are no longer of a punishable nature.[2]

Wilders, a prominent right wing critic of Islam, described the film as "a call to shake off the creeping tyranny of Islamization".[3]

The Friends of the Party for Freedom (or PVV) foundation commissioned the film. It contracted a production company credited in the film as "Scarlet Pimpernel Productions", a pseudonym adopted allegedly out of fear of reprisal.[4]

The film was initially released on the London-based website Liveleak.com. It was removed a day later in response to threats to the company's staff, by which time it had already been posted to Google and Youtube. The initial reaction in the Netherlands was restrained, but the film prompted protests in Pakistan.[5]

"My intention was not to offend in any way but to show the truth -- at least, the truth as I see it," Wilders said. "And if the truth hurts and could be offensive, well, this of course is not my problem." [6]

On 14 December 2008, a conference entitled "Facing Jihad" was organized at the Begin Center in Jerusalem. Those present included Geert Wilders, Arieh Eldad, Robert Spencer,Itamar Marcus, Daniel Pipes, Shlomo Sharan and John David Lewis. During the conference the film Fitna was shown, it was distributed to all conference participants, and it was announced that the film would be shown in several European parliaments. The Ruder Finn PR company organized the conference and set up the group's website,[7] and are also actively distributing the film. Ruder Finn has been distributing the film for free.

During February 2009, Geert Wilders visited (or planned to visit) several European capitals to present the Fitna. He was barred from entering the UK, but his film was nonetheless shown in the House of Lords. Wilders also presented Fitna in Rome (13 Feb 2009). The press releases to promote the showing in both cases was done by Ruder Finn.[8]

On 12 February 2009, Wilders was denied entry to the United Kingdom after being invited by the Lord Pearson of the UKIP and Caroline Cox (Conservative Party) to show his film in the House of Lords.[9]In October 2009 the courts overturned the Home Office order banning Wilders from entering the country. He spoke at a Westminster press conference hosted by Pearson.[10] He visited again in March 2010 to show Fitna in the House of Lords at the invitation of Pearson and cross-bencher Baroness Cox. At the press conference afterwards he repeated his views that Islam was a "fascist ideology", "a violent and dangerous religion and a retarded culture". A large-scale police operation was needed to keep apart protestors from Unite against Fascism and the far-right English Defence League who had turned out to welcome him to London. [11]