Patrick Barbour is a trustee of Civitas, and was one of the three founders of Reform. He is also the author of the position paper for the Taxpayers Alliance's 'Better Government Campaign' where he argued that 'We need serious structural reform of Government'.[2][3] Barbour has also made donations to the Stockholm Network[4][5] and is a business supporter of Global Vision.[6] He is a trustee of the Politics and Economics Research Trust which is the research wing of the Taxpayers' Alliance.[7]

According to his profile on the Young Britons' Foundation website Barbour spent 40 years building the companies Barbour Index Plc and Microgen Plc.[8] He is also a founding director of Barbour Logic.[9] He sold Barbour Index for £22 million in 1999.[10]

Barbour has been politically active on the Eurosceptic right of the Conservative Party since at least the early nineties when he helped to fund the Bruges Group.[11] In 2010 the Sunday Times reported that Barbour had made donations to UKIP through Global Britain.[12] In March 2011 Barbour co-signed a letter entitled HS2 Cannot be Justified arguing against the proposed HS2 high-speed rail line.

As of 20 April 2016, the Electoral Commission recorded Barbour as having donated £500,000 to Vote Leave, the official flag bearer of the 'leave' vote in the UK's referendum on EU membership. [13] 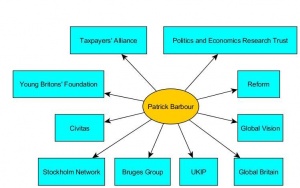