Norman Beresford Tebbit, Lord Tebbit of Chingford (born 29 March 1931) is a right-wing British politician. He was a key member of the second Thatcher government and was Secretary of State for Trade and Industry from 1983 to 1985 and chairman of the Conservative Party from 1985 to 1987. [1]

Tebbit was an active member of the Conservative Party from 1946 and in 1970 was elected Conservative MP for Epping. [3] That year he joined the Conservative Monday Club, [4] a right-wing Tory association founded in the 1960s and notable for having promoted a policy of voluntary, or assisted, repatriation for non-white immigrants. [5][6] Tebbit was MP for Chingford from 1974 to 1992 when he was given a life peerage. [7]

In 1984 Tebbit was elected a member of the Other Club, a secretive dining society made up of powerful establishment figures from politics, business and to a lesser extent journalism and academia. [9] The Home Secretary Leon Brittan was also elected a member that year. [10]

In 1985 he became Chairman of the Conservative Party and was also appointed Chancellor of the Duchy of Lancaster by Thatcher [11] – a position involving no official responsibilities but used to keep favoured figures in government.

Attacks on the BBC

Tebbit has a particular preoccupation with the media and especially the BBC, which he regards as having a left-wing bias. Tebbit has described the BBC as 'insufferable, smug, sanctimonious, naive, guilt-ridden, wet, pink orthodoxy of that sunset home of that third- rate decade, the 1960s'. [15] In 2003 he wrote that the BBC, ‘is institutionally Labourist and badly needs counselling and retraining to understand what political neutrality entails.’ [16]

Like other Tories, Tebbit was incensed with the BBC's coverage of the Falklands conflict in 1982. He recalled in his 1988 autobiography:

[The] unctuous 'impartiality' of the BBC's editorialising was a source of grief and anger. Few of us concerned will ever forgive the phrase, 'The British authorities, if they are to be believed, say ...' or the regular references to British and Argentinian forces rather than 'our forces' and 'enemy forces'. The elaborate even-handedness jarred cruelly with those whose lives were at risk, those of us who took ultimate responsibility for committing our forces, knowing the human cost of what we had to do, and with the general public. ... For me the British Broadcasting Corporation might have better called itself the Stateless Persons Broadcasting Corporation for it certainly did not reflect the mood of the British people who finance it. [17] 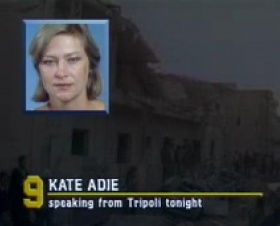 Tebbit’s most high profile attack on the BBC was in 1986 when he was Chairman of the Conservative Party. Tebbit attacked the BBC over its coverage of the US bombing of Libya that April, for which the Americans were controversially granted use of British air bases. Tebbit wrote in his autobiography: 'Even many reasonably minded people were uneasy, especially as they watched the misleading and unbalanced BBC coverage of the affair. [18] Years later he wrote: ‘to tell the truth, I was probably as strident as I was partly because I had reservations (which I think were justified) about the Government process which led to our involvement, and some unease (which proved unjustified) about the policy itself.’ [19] One Tebbit's most senior assistants at the time of the 1987 election later told the author and journalist Michael Cockerell that Tebbit's attacks were a deliberate and successful policy designed to cow the BBC into respectful reporting of the campaign. [20]

Tebbit’s attack was based on a document produced by Conservative Central Office, which he later described as a ‘factual dossier comparing news bulletin by news bulletin, line by line, the reports broadcast by BBC and ITN.’ [21] The BBC's 9 O'Clock News was contrasted with ITV’s News at Ten, the former of which was said to be ‘riddled with inaccuracy, innuendo and imbalance’. [22] It was claimed that:

News at Ten was able to preserve an impartial editorial stance, while the BBC took a number of editorial and journalistic decisions the effect of which was to enlist the sympathy of the audience to the Libyans and to antagonise them towards the Americans. [23]

The dossier was sent to the BBC on 30 October 1986 with a cover letter from Tebbit which read:

In the light of our evidence, you may feel that the BBC news reporting, in this instance at least, fell short of the high standards which the Corporation espouses. Indeed, you may conclude that far from being balanced, fair and impartial, the coverage was a mixture of news, views, speculation, error and uncrtiical carriage of Libyan propaganda which does serious damage to the reputation of the BBC. [24]