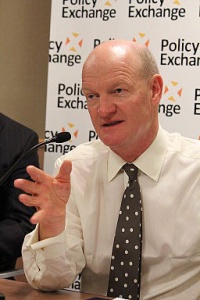 He was the Minister of State (Universities and Science) at the Department for Business, Innovation and Skills in the incoming coalition government in 2010.[2] He resigned from the Government in July 2014.[3]

In October 2014, Willetts took on the role of education investment adviser to the Silvertown Partnership, an organisation which specialises in the regeneration of towns. He became a visiting professor at King's College London, working with the Public Policy Institute in the same month. [4]

He was a director of the right-wing think-tank Policy Exchange from November 2001 until June 2002 and its sister organisation CChange until August 2006.

In June 2015 he was appointed to a part-time position as non-executive board member of the National Council for Universities and Businesses having sought the advice of the Advisory Committee on Business Appointments.

Willetts took up a part-time, paid appointment as non-executive director for Biotech Growth Trust in November 2015 with the approval of the ACOBA, providing he did not use any privileged information from his time in government and that he serve a two year lobbying ban. [5]

He also started a new position as an unpaid independent trustee director with the Francis Crick Institute in December 2015, gaining approval from ACOBA despite his direct dealings with FCI during his time in office.

In January 2016, Willetts also took up a role as honorary president of the International Student Foundation. [6]

Willetts has also taken up the following appointments since he left government with the consent of the committee:

According to the MP's Register of Financial Interests Willetts received the following donations and financial payments:

Name of donor: Sir Michael Bishop
Address of donor: private
Amount of donation or nature and value if donation in kind: £35,000—to support the work of my office as Shadow Secretary of State for Universities and Skills, to pay annual salary of research assistant.
Date of receipt: 23 February 2010
Date of acceptance: 23 February 2010
Donor status: individual (Registered 17 March 2010)

Name of donor: Price Waterhouse Coopers
Address of donor: 1 Embankment Place London WC2N 6RH
Amount of donation or nature and value if donation in kind: £4,662 in connection with research into the ‘Early Years Entitlement’ programme, made in relation to my previous capacity as front-bench spokesman Date of receipt: 30 April 2010
Date of acceptance: 10 May 2010 Donor status: company No BR000746 (Registered 27 May 2010)