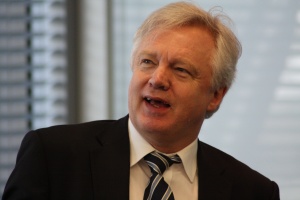 David Davis is a British Conservative Party MP. He was the MP for Boothferry from 1987 to 97 and has been MP for Haltemprice and Howden since 1997.[1]

A veteran Conservative, he was appointed as 'Brexit' Secretary by the incoming Prime Minister Theresa May on 13 July 2016, a new brief she created to help coordinate Britain's departure from the European Union. Davis has been a staunch Brexit supporter and campaigned devotedly for 'Vote Leave' in the 2016 referendum. [2]

‬ Davis has expressed strong support for fracking and vociferous anti-wind views. In an article written for The Daily Mail in 2013, Davis said:

'Even the Government accepts its growth-killing green policies will cost Britain many tens of billions. We need an urgent and radical change, of course.'

'Clean, cheap, plentiful and safe, shale gas is an opportunity that Britain cannot afford to ignore. It is time to wave goodbye to wind farms, shelve the solar panels and get fracking.' [5]

Davis's constituency includes four oil and gas licence blocks, awarded by the Oil and Gas Authority under the 14th licensing round in 2015. Two shale licences were awarded to Cuadrilla and two to Europa. There are plans to conduct 2D seismic surveying, but as of November 2016 no applications or plans for shale wells were underway. [6]

Davis has a generally voted against increased regulations on fracking. [7]

Davis won his seventh successive election campaign when he was re-elected in the 2015 general election. He further increased his majority to 16,195 over closest rival Labour Party candidate Edward Hart, and gained 54% of the vote. [8]