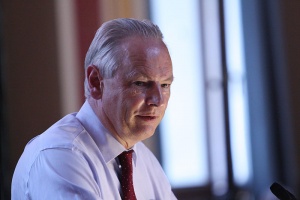 Former minister for the Cabinet Office Francis Maude at the 10 Steps to Cyber Security event in London, 5 September 2012.
"[O]ne of the things that Thatcher regretted was not pushing ahead vigorously enough, and quickly enough, in terms of reform. …
By contrast we have prepared very carefully. So we are well equipped to hit the ground running." - Francis Maude [1]

Francis Anthony Aylmer Maude (Lord Maude of Horsham) (born 4 July 1953) is a UK Conservative Party peer who was a government minister from 2010-2015 and is co-founder of the influential right-wing think-tank Policy Exchange.

Since leaving government Maude has taken up a series of private sector posts, most controversially as a senior adviser with Covington & Burling LLP, a business and corporate law firm that works extensively in Europe. He 'will be assisting the firm and its clients as they navigate complexities around Brexit'.

On 11 May 2015 Maude was appointed as a minister of state for trade and investment in the Department for Business, Innovation and Skills.[5] He also occupies the same position for the Foreign and Commonwealth Office.[6]

A barrister by training, Maude was first elected to Parliament in 1983 as MP for North Warwickshire and from 1987 to 1992 was successively Minister for Corporate and Consumer Affairs at the DTI, Minister of State at the Foreign Office and Financial Secretary to the Treasury. Following the 1997 election, he was Shadow Secretary for Media, Culture and Sport from 1997 to 1998, Shadow Chancellor from 1998 to 2000 and Shadow Foreign Secretary from 2000 to 2001.

In 2001, Maude also was Michael Portillo's campaign manager for the Conservative Party's leadership. [9] Dubbed ‘Portillistas’ by Westminster commentators, Portillo’s backers saw themselves as modernisers of an out of touch party which had put off potential voters through its negativity, xenophobia and social conservatism. Portillo withdrew from the Conservative leadership race on the evening of 17 July 2001 and subsequently announced that he would leave politics. Only days later, another of Portillo's backers Archie Norman, who Maude had worked with at Asda, told the Daily Telegraph’s Rachel Sylvester that he and other Portillo supporters were planning to set up a think-tank. [10]

Maude and Norman emerged as leaders of the ‘Portillistas’. They decided to set up two seperate think-tanks as part of their modernisation project. One, XChange Ideas or simply XChange, would be rebranded as Policy Exchange a few months later. A company limited by guarantee, formed in October 2001, became XChange Ideas on 9 November 2001. A seperate company Conservatives for Change was also was set up that October, and was branded CChange. Maude was a director of CChange (which has since been dissolved) from October 2001 to August 2006.

Having stepped down as minister for trade and investment in March 2016, Lord Maude sought the advice of the Advisory Committee on Business Appointments (ACOBA) regarding a new part-time role as an advisory board member for Anvest Partners, a new real estate investment company. The role was to advise Anvest's executives on strategy, investors and investment.

ACOBA contacted Maude's former departments to take their views into account and no concerns were raised. He was allowed to take up the role providing he serve a two year lobbying ban from his final day in office and did not use any privileged information from his time in government. His appointment was confirmed in April 2016.

Maude sought ACOBA's advice again in October 2016 for the role of non-executive chairman of the advertising agency Cogent Elliott Group Ltd. This part time and paid role would involve providing strategic leadership and mediation with clients. The committee found that the company had no relation to his political career or former department, and would not involve any contact with government.

Maude sought advice a third time for the role of senior adviser with Covington & Burling LLP, a business and corporate law firm that works extensively in Europe and employs more than 120 former government officials, diplomats and regulators. The role would involve providing advice to the firm and its clients on policy and regulatory issues, particularly surrounding Brexit. ACOBA again found that it would not involve contact with government, and the firm had no relation to his political career or former department. The appointment was approved the same month. [11]

A spokesperson for Covington said that Maude 'will be assisting the firm and its clients as they navigate complexities around Brexit'. It is one of many law and financial firms that have begun to set up advisory units on how their commercial interests will be affected by Brexit, and how to understand and shape UK policy outside of the EU. [12]

On his appointment, Maude said: 'there is no doubt that the next few years will be pivotal, not only for the future of the United Kingdom and UK businesses, but also for many European, American and international companies operating in the interconnected, global economy. Covington’s reputation in the government affairs and regulatory arena is second to none, and I am very pleased to be joining this dynamic team.' [13] While ACOBA's recommendation barred Maude from personally lobbying government on the company's behalf, it does not prevent him on advising others how to do so. Covington does not disclose any clients on the UK’s statutory lobbying registers.

The appointment was criticised for showing a 'disgraceful' conflict of interests and comes amid continued pressure on the government to prevent former ministers from taking up private sector roles where their contacts and insider knowledge may be exploited. [14]

'From Tory reaction to Conservative confection'

An article for the left-wing magazine Red Pepper states:

Conservative Party chairman Francis Maude is in charge of the Tory dressing up box and the driving force behind David Cameron’s costume change. Maude’s career shows the links between the old Tory reaction and the new Conservative confection. Maude hands out the new touchy feely Tory costumes now but he was an old-fashioned minister back in the days when the Conservatives were in government.

Thatcher gave him a junior foreign office post, where his first big success was organising the forcible repatriation of Vietnamese ‘boat people’ from Hong Kong. In 1989, he got riot police to force the Vietnamese refugees back to the ‘red’ country they had fled, while the Thatcher government continued to shout about ‘freedom’ and proclaim its opposition to totalitarian communism.

As a Treasury minister in John Major’s government, Maude was a top privatiser. Major says that in 1991 Maude ran ‘a series of head-to-head meetings, or bilaterals, with departmental ministers in which he would challenge them on their plans for privatisation, competition and contracting out’. The electorate kicked Maude out of parliament in 1992, so he took a job as head of privatisation at Morgan Stanley bank, which profited from these same policies.

Maude was re-elected in 1997 and rebranded himself a ‘moderniser’. In 2003 he signed the letter that brought an end to Iain Duncan Smith’s leadership of the party. While Duncan Smith was too Neanderthal for Maude, he was happy to be party chairman when the equally right wing but less stupid Michael Howard led the Tories.

Maude also launched a think tank, called C-Change, to promote Tory ‘modernisation’. It is the sister organisation of Policy Exchange, David Cameron’s favourite think-tank, which Maude set up with Archie Norman in 2002.

Maude has given up some bigotries, but he has not moved on economically. Rather than moving to the left, he hopes to benefit from Labour’s move to the right. Maude praised Blair’s politics, saying, ‘One of the great achievements of New Labour is to take class out of politics.’

Maude’s strategy is to give his party a makeover to remove its obviously reactionary twitches. Take out the obvious prejudice but leave the basic politics intact. Maude believes Labour’s business-friendly approach means the Conservatives cannot be challenged for championing the rich and powerful.

In his keynote speech setting out the Conservative agenda to parliament, Maude admitted that the public thought Tory plans for privatisation were ‘aimed at enriching sinister business interests’. Because the public looked at ‘commercial providers’ in the NHS with suspicion, the plan to hand over the welfare state to big business ‘is unlikely to be achieved by one party working alone’.

However, Maude was pleased to admit that Labour MPs ‘such as Alan Milburn and Stephen Byers … are willing to argue publicly’ for privatisation. While the old Tories, like Iain Duncan Smith, reacted to Labour’s shift rightwards by trying to find even more reactionary policies to distinguish themselves, the modernisers simply welcome Blairism and hope to take over the job when Blair goes.

Maude certainly puts business first. Until earlier this year he was chairman of a PR Firm, called Incepta. Maude was not worried that one of its subsidiaries, Citigate, donated thousands of pounds to the Labour Party: Citigate represented privatisers like Group 4, so Maude’s firm needed to pay cash to the governing party to represent its clients. Business trumps politics.

Maude has helped run Cameron’s modernising campaign, like the Tory leader’s recent speech claiming he would put ‘commercial responsibility before profits’, and castigating sweety makers for adding to Britain’s obesity crisis. While Cameron takes on the chocolate oranges, Frances Maude is chairman of the Mission Marketing Group. Maude’s new company is an ad agency whose clients include Walkers Crisps and Virgin Cola. [17]