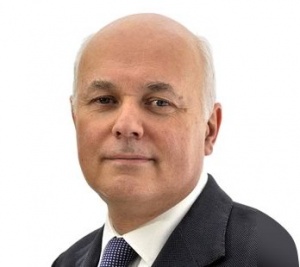 He was leader of the Conservative Party from September 2001 to November 2003. He lost a vote of confidence in October 2003 year and stepped down eight days later, with Michael Howard taking up the post.

On 18 March 2016, Duncan-Smith resigned his post as work and pensions secretary over benefit cuts made by chancellor George Osborne in the spring budget.[4]

According to the website of the naval training school, HMS Conway, Iain Duncan Smith was there between 1968 and 1972. Under a section entitled 'Notable old Conways' the website describes how:

'He joined Conway in January 1968 when he was nearly 14. During his sojourn he was a Focsleman, a drummer in the band, captain of the cricket team in 1972, won "colours" in the first XV in the Autumn 1971 term and played for the hockey team. He won the Lawrence Holt prize for History in 1972 and left with 3 A levels and 8 O levels'.[5]

A Newsnight investigation in December 2002 found that Iain Duncan Smith's CV contained 'inaccurate and misleading' claims about his education. The investigation found that Duncan Smith's biography on the Conservative Party website, his entry in Who's Who, and various other places, stated that he went to the Universita di Perugia in Italy. It transpired instead that he had attended the Universita per Stranieri, which is also in Perugia, however the University did not award degrees when Duncan Smith attended in 1973. When challenged by Newsnight, Duncan Smith's office confirmed that he 'didn't get any qualifications in Perugia or even finish his exams'.[6]

The first line of Ian Duncan Smith's biography on the Conservative Party website claimed that he was 'educated at Dunchurch College of Management'. Dunchurch was the former staff college for GEC Marconi, where he worked in the 1980s, again Duncan Smith's office confirmed to Newsnight that 'he did not get any qualifications there either, but that he completed six separate courses lasting a few days each, adding up to about a month in total'. John Garside, a former Dunchurch tutor, told the Newsnight investigation team 'I'm puzzled, flattered, but puzzled. What we did was offer short courses... it was not a continuous form of education by any means.'[7]

Iain Duncan Smith supported the launching of a pre-emptive attack on Iraq, prior to the 2003 invasion, because he argued 'It is now time for the prime minister to explain to the British people what he already knows - that Iraq is a clear and growing danger to Britain.'[8]

In an article for the Big Issue, Iain Duncan Smith argued that Britain was heading for 'social apartheid' because of the welfare system. In laying out his agenda for the Centre for Social Justice, he cited the work of Charles Murray arguing that:

The right-wing commentator Charles Murray has described the emergence of a caste society where the cheapest option becomes the segregation of society’s most vulnerable and most dysfunctional members. In Murray’s gated society problems are never conquered – only managed. Some people are literally imprisoned. Some, particularly minority communities, live in heavily-policed urban ghettoes. In this vision of social apartheid some are kept permanently on benefits. Others are becalmed by Ritalin and equivalent drugs.

There is one sure way of making sure that this dystopian caste society becomes a horrible reality for Britain. And that is to carry on as we are. Labour may hate the idea of a caste society but that is exactly where we’ll end up if we stick with their big-state, values-free mindset.[9]

Iain Duncan Smith was prominent in the campaign for the UK to leave the EU.

The Liberal/Conservative coalition government of 2010 was described as a 'coalition of millionaires' because 23 of its 29 MPs who are entitled to attend Cabinet meetings have assets and investments estimated to be worth more than £1million. Iain Duncan Smith is one of the 23 millionaires.[10]

A seating plan of the Conservative Party's Black and White Ball, in February 2014, was leaked to the Guardian in October 2014. The party, which guests pay between £450 and £1000 for a ticket, seats diners with the minister most relevant to them. The report revealed Duncan Smith 'was seated with directors of the doorstep lending firm CLC Finance, which advertises loans at a 769.9% annual interest rate'. Two of the directors of CLC who sat with Duncan Smith, Philip Wilbraham and Dominic Wilbraham, are also members of Wilbraham Securities LLP. The firm have given £28,500 to the Tories over the past three years, with the donations beginning in 2011, coinciding with when pressure started to mount on the government for tighter regulation in the high-cost credit market.[11]

On the 9 February 2015, Duncan Smith attended the Conservative Party's 'Black and White Ball' election fundraiser at the Grosvenor Hotel in London. The event was attended by almost the entire Cabinet, Boris Johnson and George Osborne did not attend due to the G20 event, and by party donors including; hedge fund boss Stanley Fink (Lord Fink), who wants Britain to rival offshore tax havens with an equally generous tax regime; founder of Lycamobile, who paid no corporation tax between 2007 and 2014 despite generating millions in revenue, Subaskaran Allirajah; jewellery tycoon Ranbir Singh Suri and lap dancing club owner Peter Stringfellow.

To raise additional money at the event, the Party sold one-off prizes. These included, a 10km Iron Man run with Duncan Smith, dinner at home with Michael Gove and his wife, shoe shopping with Theresa May, a meal at the Carlton Club with Sajid Javid and a session of jogging with Nicky Morgan.[12][13]