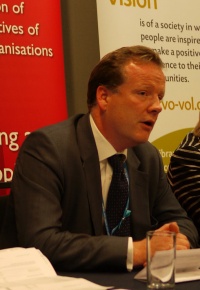 He was appointed as Lord Commissioner to HM Treasury, part of the Government Whip on 13 May 2015.[3]

Not in my constituency

In September 2013, Elphicke wrote a piece for Conservative Home supporting fracking, in which he writes:

'Shale gas presents [an] opportunity. And it does more. It offers the UK the chance to invest in immature low carbon technologies which are home grown and which can then add real value to the UK if they can be properly developed and sold abroad. It offers local communities the opportunity to directly benefit from the natural resource buried thousands of feet beneath our feet. And it offers the government an asset against which it can borrow (if necessary) but which will in any case offer foreign investors confidence in the stability of UK PLC' [4].

A month later however, he came out against opposed the applications for exploratory drilling in East Kent and vowed to convince other Ministers to do the same, saying:

'I’ve always said we have got to balance that against safety – the risk to the water aquifer and our drinking water is too great. So I oppose these applications. In other areas that are more suitable and don’t have the same risks we should explore it but we use the aquifer for all our drinking water. If it could be contaminated this is a risk I don’t think we should take.' [5]

Elphicke has voted a mixture of for and against increased regulation on fracking. [6]