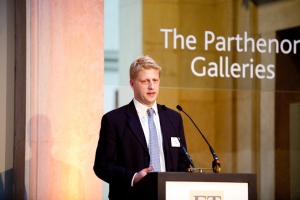 Jo Johnson is the UK Conservative Party member of Parliament for Orpington.

In July 2019 he was appointed minister of state at Department for Business, Energy and Industrial Strategy‎‎ by his brother Boris Johnson, the incoming prime minister.

Johnson was appointed head of the Downing Street Policy Unit and a Cabinet Office minister in April 2013 as part of a cabinet shake-up designed, according to The Times, to "build bridges" with David Cameron's backbench critics and "capitalise on the legacy of Margaret Thatcher".

In July 2014 he was promoted to minister of state at the Cabinet Office while remaining head of the Downing Street Policy Unit.[1] After the 2015 general election Johnson was appointed minister for universities and science.[2]

A former financial journalist and old Etonian, he is the brother of former London Mayor Boris Johnson. [3]

Johnson joined the Financial Times in 1997, after working as an investment banker at Deutsche Bank. He had two foreign postings with them: firstly as Paris correspondent (2001–05), and then as South Asia Bureau chief based in New Delhi (2005-08). In 2008 he became an associate editor of the Financial Times and head of the Lex Column. [5]

Johnson began his schooling in Brussels, at the European School in Uccle, before attending Ashdown House School in East Sussex, and then Eton College. In 1991, he went to Balliol College, Oxford to study modern history. Jo did his postgraduate studies in Europe and has degrees from two further European universities. [5]