Cruddas is a Conservative Party donor and former co-treasurer of the party, resigning after a 'cash for access' newspaper sting.

He is a Brexit supporter and was one of the biggest donors to the campaign for Britain to leave the EU, giving a total of $350,000.

Cruddas is a major donor the Conservative Party.[2]

In June 2011 the self-made billionaire was appointed co-treasurer of the Conservative Party, alongside long-serving treasurer Stanley Fink.[1] [3] Fink stepped down in early 2012, to be replaced by another hedge fund millionaire, Michael Farmer. Just nine months later Cruddas resigned as Tory co-treasurer after a 'cash for access' newspaper sting (see below).

Cruddas was a major donor to the eurosceptic Vote Leave campaign in the UK's 2016 EU referendum. He gave the Brexit campaign £350,000.

In June 2016, the Financial Times reported that Cruddas had suffered losses due to market volatility in the wake of a Brexit vote. Cruddas saw CMC Markets's value drop by £100 million since the vote on 23 June 2016, with a recovery taking his losses down to just £30 million overall. [4]

He was by far the largest donor to the successful ‘No to AV’ campaign in 2011, which opposed replacing the UK's first-past-the-post voting with a fairer 'alternative voting' system. He effectively bankrolled the campaign with a donation of £400,000.[5] 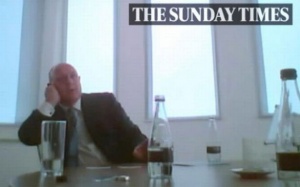 A still from the Sunday Times undercover video which showed Peter Cruddas offering access to the prime minister David Cameron in return for donations to the Conservative Party.

On 25th March 2012 the Sunday Times released an undercover video showing Peter Cruddas offering access to the prime minister David Cameron in return for donations of around £250,000. In the video Cruddas states:

'Two hundred grand to 250 is Premier League… what you would get is, when we talk about your donations the first thing we want to do is get you at the Cameron/Osborne dinners.

But within that room everything is confidential - you can ask him practically any question you want.

Following the release of the video Cruddas resigned from his position as Tory co-treasurer. Cruddas stated:

'Clearly there is no question of donors being able to influence policy or gain undue access to politicians. Specifically, it was categorically not the case that I could offer, or that David Cameron would consider, any access as a result of a donation. Similarly, I have never knowingly even met anyone from the Number 10 policy unit. But in order to make that clear beyond doubt, I have regrettably decided to resign with immediate effect.' [9]

However in June 2013 Cruddas won his libel case against Times Newspapers Ltd. The London Evening Standard reported that:

Former Conservative Party co-treasurer Peter Cruddas has won his libel action over an allegation in the Sunday Times about charging £250,000 to meet David Cameron.

The 59-year-old businessman brought an action for defamation and malicious falsehood against Times Newspapers Ltd and two members of the newspaper's Insight team over three articles which appeared in March 2012.

They appeared after the journalists pretended to be agents for foreign investors who wanted to explore making donations to the party and hired a lobbyist, through whom they arranged to meet Mr Cruddas.

Unknown to him, said Mr Justice Tugendhat at London's High Court, each reporter carried a concealed camera with an audio recording facility.[10]

The Press Gazette reported that:

Cruddas complained the articles meant that, in return for cash donations to the party, he corruptly offered for sale the opportunity to influence government policy and gain unfair advantage through secret meetings with the Prime Minister and other senior ministers. He also said they meant he made the offer even though he knew the money offered for meetings was to come, in breach of the ban under UK electoral law, from Middle Eastern investors in a Liechtenstein fund and was happy that the foreign donors should use deceptive devices to conceal the true source of the donation.

The newspaper took issue with the meanings claimed by Cruddas, pleaded justification in alternative meanings to the libel claims, and denied the articles were false or published maliciously.

But yesterday Mr Justice Tugendhat ruled in Cruddas's favour on meaning, struck out the justification defence and entered judgment for him on the defamation claim, with damages to be assessed. The matter is due to return to court on 17 June.

The judge said that, in the light of his decision, it was up to Cruddas, who was also granted an injunction preventing continued publication on the newspaper's website, to decide whether to pursue the malicious falsehood claim.

A spokesman from the newspaper said: "The Sunday Times is applying for permission to appeal the decision of Mr Justice Tugendhat and will continue to seek to defend the undercover journalism behind this public interest report on cash for access to Cameron. [11]

On 21 June 2013 Sunday Times won an Appeal Court decision against the ruling of Mr Justice Tugendhat that the published articles made an allegation of corruption contrary to the criminal law ([2013] EWHC 1427 (QB)). The Court set aside the orders striking out the defence of justification and entering judgment for the claimant. Lord Justice Longmore also lifted the injunction preventing publication of the allegations. [12]