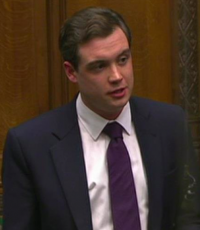 Wharton was made a minister in the Department for International Development by Theresa May in 2016. Prior to that, in May 2015, Wharton was appointed 'Northern Powerhouse' minister. [2]

In September 2017, Wharton joined lobbying firm Hume Brophy as a senior adviser. Wharton said: "With Brexit underway the importance of good advice and insight has never been more obvious."[3]

Wharton's actions are seen as paving the way for the Brexit referendum. In 2013 he topped the ballot for private members' bills. He chose to address the issue of a referendum on Britain's membership of the European Union by attempting to enshrine the Conservative Party Position into law by introducing the European Union (Referendum) Bill 2013-14. Wharton had previously suggested that too much time was spent debating the issue of Europe, but has since argued that his Private Member's Bill was designed to put the issue to rest.

Wharton's brief since May 2015 has focused on the Northern Powerhouse initiative that aims to help boost the economy of the north of England. Prime minister David Cameron has said that: 'We will make sure our economic recovery reaches all parts of our country - and that includes building the Northern Powerhouse and delivering the infrastructure we need.' [4]

Wharton has repeatedly defended Sri Lanka's regime in the House of Commons and has travelled to the island several times at their expense. According the Telegraph:

During a Westminster Hall debate in January, Mr Wharton said: “I have been to Sri Lanka a number of times, and the visits are all declared in the Register of Members’ Financial Interests.

“What worries me is how much misinformation is out there about what is happening on the ground. The tone of debate in the House too often worries me, because we focus on what we can do to punish the government of Sri Lanka.”

The Telegraph reported that:

Mr Wharton said he had “declared all declarable visits in accordance with the rules”. He said he had visited the country “as a guest of the government… to ensure a balanced view on all the issues”.

In November 2013 Wharton was one of several Tory MPs told by the Whips’ Office had told MPs that they could not go to Sri Lanka following an investigation by the Telegraph newspaper. [5]

A seating plan of the Conservative Party's Black and White Ball, held in February 2014, was leaked to the Guardian in October 2014. The party, which guests pay between £450 and £1000 for a ticket, seats diners with the minister most relevant to them. The report revealed that Wharton sat on a table with the then energy minister, Michael Fallon, Alun Cairns MP and Alexander Temerko, a director of Offshore Group Newcastle, a firm which supplies the offshore renewable energy industry. Both Wharton and Cairns are MPs of constituencies where the offshore wind farms have been proposed and have both benefited from donations directly from Temerko. [6]

Wharton was part of a 10-person parliamentary delegation to the United Arab Emirates (UAE) in April 2012.

The trip lasted five days and gave British parliamentarians the opportunity to meet with senior government officials and private companies in both Dubai and Abu Dhabi. The UAE government paid £3,500 toward Wharton's travel and accommodation. [8]