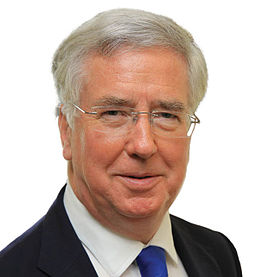 Michael Fallon (born 1952) has been the British member of Parliament for Sevenoaks since 1997. Since 2010 he has held several ministerial positions in energy, business and defence.

Fallon was UK defence secretary for three years from July 2014 following a cabinet reshuffle[1] until his resignation in November 2017 when sexual allegation claims against him emerged.

Fallon was business minister from September 2012 at the Department for Business, Innovation and Skills (BIS)[2] minister of state for energy in the Department of Energy and Climate Change from 2013, stepping down from this dual role in the Cabinet reshuffle of July 2014.

Fallon was appointed deputy chairman of the Conservative Party in September 2010 and a Privy Counsellor in 2012. [3]

In February 2017 Fallon in his role as defence secretary of state dined with leading arms firms Raytheon and Airbus under the auspices of the Atlantic Council'. [6]

In April 2017 Fallon and his armed forces minister Mike Penning attended the Army v Navy rugby match at the invitation of Babcock; he met the CEO of Babcock, Archie Bethel, and John Spencer, the President of the RFU.[7]

On 24 April I took part in a conference organised by the North West Energy Taskforce and the two Lancashire Chambers of Commerce in order to highlight to Lancashire business the potential opportunities from successful fracking gas development. [8]

'In December we published the Regulatory Roadmap setting out the robust regulatory framework in place for exploration.
In addition, in response to the Mackay Stone report on emissions, the Environment Agency has agreed to make green completions a requirement of environmental permits for shale gas production.
We have also published environmental risk assessment guidance for operators to assess risks at an early stage in line with the Royal Society/Royal Academy of Engineering report.
We have also have clarified and streamlined the regulation of exploration activity. The Environment Agency has developed a single application form for permits. We will introduce standard rules environmental permits later this year cutting permitting times from 13 weeks to 2- 4 weeks for lower risk activities.
Industry has committed to a community benefits package that will pay £100,000 to communities per hydraulically fractured well site at exploration and 1% of revenue if the site proceeds to production.
Local councils will also benefit by retaining 100% of the business rates they collect from productive shale gas and shale oil developments - doubling the 50% rate retention previously given. That could be worth up to £1.7m a year for a typical 12 well site.
In the Autumn Statement 2013, we introduced the most competitive tax regime in Europe for shale gas and shale oil.
We’ve announced 2 million pounds public money to support companies looking to develop innovative processes for shale exploration or production, to help UK firms develop products and services in this new sector. All of these steps will encourage the responsible development of shale gas and oil.'

'There are three elements to the proposal: a right of underground access below 300m for shale and deep geothermal companies, a community payment in return for access and a notification system for the community,
Allowing underground access at depths below 300m can have no impact on landowners – this is a six-inch hole, ten times the depth of the deepest tube platform. We expect fracking to take place over a mile down.' [9]

Fallon gave a television interview in January 2014 to the BBC on the subject of fracking, where he praised the use of shale gas extraction.

A seating plan of the Conservative Party's Black and White Ball, in February 2014, was leaked to the Guardian in October 2014. The party, which guests pay between £450 and £1000 for a ticket, seats diners with the minister most relevant to them. The report revealed that whilst energy minister, Fallon dined with Alexander Temerko, a director of Offshore Group Newcastle, a firm which supplies the offshore renewable energy industry. Joining Fallon and Temerko at the table were James Wharton and Alun Cairns, who are MPs of constituencies where the offshore wind farms have been proposed and have both benefited from donations directly from Temerko. [10] Other guests at the table included Shore Capital's CEO David Kaye and Simon Fine.

To raise additional money at the event, the Party sold one-off prizes. These included dinner at home with Michael Gove and his wife, shoe shopping with Theresa May, a meal at the Carlton Club with Sajid Javid and a session of jogging with Nicky Morgan.[11]

Between 1992 and 1997 he developed his business career as a director of three companies founded by Dragons Den star Duncan Bannatyne before returning to Parliament in 1997. He served as a shadow Treasury Minister under William Hague before joining the Treasury Select Committee of which he was deputy chairman from 2001 until 2010. [12]

In the 2015 general election, Fallon retained his seat with a strong majority of 19,561.