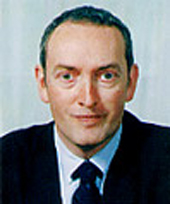 John Hutton (Lord Hutton of Furness, full name John Matthew Patrick Hutton) was Labour MP for Barrow and Furness between April 1992 and April 2010. He entered the House of Lords on 1 July 2010. [1]

Hutton was educated at Westcliff High School for Boys, in Essex, and Magdalen College, Oxford. He became a law lecturer at Northumbria University, before being elected the MP for Barrow and Furness in 1992. He is a friend and former flatmate of key Blair ally Alan Milburn. He was secretary of state for Business, Enterprise and Regulatory Reform from June 2007,[2] until October 2008, then defence secretary until June 2009.

Hutton has been praised by Vincent de Rivaz from EDF from his time in government for his "stewardship of energy policy in the last Labour Government that brought nuclear back onto the agenda". [3]

Having been instrumental in promoting nuclear in parliament, in June 2011, a year after stepping down as an MP, Hutton took over as Chair of the Nuclear Industry Association trade body.[4]

In government, Hutton was also seen as a keen defender of local industries including Britain's nuclear Trident programme.[5] The Times described him as a "Champion of the nuclear industry" within the Cabinet,[6] and his outspoken pro-nuclear stance reportedly angered many Labour activists.[7]

In January 2008 Hutton stood up in the House of Commons and announced a Nuclear White Paper that set out, he said "a clear timetable for action to enable the building of the first new nuclear power station, which I hope will be completed well before 2020".

Dubbed the "nuclear renaissance man", Hutton told one interviewer in 2011 how he had arrived at his pro-nuclear views.

I grew up in the 1970s when there was the Three Mile Island accident [in the US] and a lot of concerns about safety. I was never very heavily one way or other on nuclear, but I probably was sceptical in the '70s.
But once I was elected and I began to consider the issue in depth, I became convinced there was no way we could meet the energy challenges we faced without a strong role for civil nuclear power in the mix. Climate change and the need to decarbonise power production made the case even more strongly. [8]

In November 2012 Hutton was appointed alongside energy secretary Ed Davey as joint head of the new Nuclear Industry Council, set up by the UK government.[9] The Council has met twice, in February and July 2013 with a range of senior nuclear industry and government officials.

Hutton, a former Labour health minister, since leaving government has been a senior adviser to PwC, non-executive director at Circle Holdings and an adviser to APCO Worldwide who lobby for pharma companies Sodexo and GE Healthcare.[10]

Hutton's last ministerial role in the UK Labour government was as secretary of state for defence from 2008 until 2009. In January 2018 Hutton ceased a longstanding defence advisory consultancy role with US arms firm to Lockheed Martin. [11]

In 2014 Hutton was contacted by the Wall Street Journal, who were researching external interests of the members of the British House of Lords. He chose not to respond to their queries and shortly afterwards deleted that he held the role of European advisory director at Dimensional Fund Advisors.[12]

In September 2009 he took up a role as an adviser with Eversheds LLP. The UK prime minister's Advisory Committee on Business Appointments (ACOBA) saw "no reason why he should not take up this appointment subject to the normal three-month waiting period for former Cabinet Ministers and the condition that, for 12 months after leaving office, he does not become personally involved in lobbying UK Ministers or Crown servants, including Special Advisers, on behalf of the firm or any of their clients".[13]

Hutton became a member of the advisory board of US nuclear power company Hyperion Power Generation (now Gen4 Energy, Inc) in July 2010. ACOBA, which vets the jobs of former ministers, said it saw 'no reason' why he should not take up the role immediately - provided he did not lobby his former department for 12 months.[4][7]

He also became an adviser to lobbying firm APCO Worldwide in August 2010, which the Committee similarly approved. [14]

In 2010 Lord Hutton was invited by the Coalition government to chair an independent commission on public service pensions, with its final report published in March 2011. He was paid £4,000 per month for a minimum of three days per week while conducting the review over a nine-month period with travel and subsistence expenses.[15] [16]

In June 2010 Hutton was appointed chairman of the Royal United Services Institute; his role was approved by ACOBA who saw "no reason why he should not take up the appointment forthwith".[17]

In June 2011 Hutton took over as chairman of trade body the Nuclear Industry Association following the end of Lord Martin O'Neill’s three-year tenure in the role.[4] Again, the role was approved by ACOBA who saw "no reason why he should not take up the appointment forthwith".[17] He retains this role as of March 2018.

Joining the PM on his 2012 Far East trade lobbying tour

In April 2012, Hutton joined UK prime minister David Cameron on his travels to Japan, Indonesia and Malaysia as part of a four-day tour of east and south-east Asia. He was travelling with a 40-strong delegation of business representatives to boost trade opportunities for the UK. [18] The group included six defence contractors including BAE Systems and AgustaWestland, along with representatives from the International Nuclear Services, the National Nuclear Laboratory, and the Nuclear Decommissioning Authority, as well as the government's Chief Scientific Adviser, Sir John Beddington. [19] Cameron was pushing Britain's expertise in nuclear decommissioning, in the wake of the Fukushima disaster. As Cameron explained:

Looking to the future, we want to continue to support the Japanese as they reconstruct the Tohoku region and tackle the challenges of the nuclear clean-up. British companies have significant expertise in nuclear decommissioning and clean-up, with 19 nuclear sites in the UK currently being managed through the process. I really think that concrete experience can be of direct benefit to Japan.' [20]