Ed Davey was the UK Liberal Democrats MP for Kingston and Surbiton from 1997 to 2015. He lost his seat to the Conservative Party's candidate James Berry in the May 2015 UK general election. [1]

Davey was energy secretary from 2012 until 2015. Amber Rudd replaced him in this role.

Since leaving office in May 2015, Davey has set up an independent consultancy on energy and climate change and has taken up over five roles with high-profile companies. His move through the 'revolving door' from politics into the lucrative energy industry has proven controversial.

In September 2015 Davey accepted a commission with Herbert Smith Freehills, a leading London law firm with close links to energy firms such as Centrica and EDF Energy. He also accepted a short consultancy as a policy adviser with Macquarie Bank, which aims to fund the installation of solar PV panels on council and housing association properties in the UK.

Davey's appointment as chairman of Mongoose Energy on a part-time paid basis was also announced. Given the links between the company and Davey's former department, the Advisory Committee on Business Appointments (ACOBA) advised he wait six months after leaving office before starting. [2]

In January 2016 Davey sought ACOBA's advice on a consulting role with MHP Communications, joining the lobbying firm that month. [3] MHP's clients include EDF Energy, one of the 'Big Six' energy firms in the UK, although Davey stated he would not be advising EDF.

A month later Davey sought to take up a part-time, paid position as non-executive director of Nord Engine Capital, a private equity investor. The committee found that Davey had no compromising connections with Nord from his time in government, and advised that so long as he did not use privileged information from his time as minister and served a two-year lobbying ban, he could take up the position, which he did in February. [4]

In June 2016 Mr Davey sought advice from the committee about becoming a patron of the charity Sustainable Futures Foundation which promotes environmental safety for the public. The role was unpaid, and would involv developing projects, raising awareness around the cause and fundraising. Providing Davey did not draw upon any privileged information from his time in office and that he serve a two year lobbying ban from his final day in government he was permitted to take up the role, and he did so the following month. [5]

In April ACOBA approved two more commissions under the terms of Davey's consultancy; that he does not draw on any privileged information, that he observes a two year lobbying ban from his last day in office and that he seek confirmation for each individual commission from the committee. The first was a commission with Fit for Future, a network of not-for-profit and charitable organisations, for which he would serve as unpaid chairman. The second was to chair a board for a project looking to establish a new form of energy company. [6]

‘He negotiated what was described as one of the worst contracts – he gave us the most expensive electricity in the world; three times the going rate. He’s now lost his seat in the House, formed a consultancy and he does deal with four companies who stand to benefit from this crazy contract that he settled as a minister...Isn’t there are suspicion that his decision to sign this generous contract which was very much against the public interest might have been influenced by his future prospects of earning money when he left the House from these four businesses?’ [7]

Davey was appointed UK secretary of state for energy and climate change in February 2012, following the resignation of Chris Huhne.[8] He was previously consumer affairs minister in the UK Department for Business, Innovation and Skills (BIS). 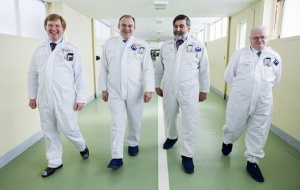 Ed Davey and John Thurso MP on a visit to Dounreay nuclear site in October 2012.Photo:DECC

In 2006 while in opposition Davey had said, “Nuclear power will only be possible with vast taxpayer subsidies or a rigged market.”

Yet in May 2012, Davey presented a draft Energy Bill containing complex 'electricity market reform' provisions that were roundly criticised by leading commentators as heavily tilted in favour of nuclear power.

In an interview Davey conceded the market was rigged, but insisted it would not benefit only nuclear. "It’s going to help all low-carbon technologies," he said. [9]

In September 2013 Davey persuaded Lib Dem party members to vote to accept nuclear power for the first time, arguing that it would "reckless" to rely on coal and gas, and insisting that there still would be no public subsidy for nuclear. He told the Lib Dem annual party conference that "I've changed my mind because of climate change", and that it would be "unimaginably" hard to create a zero-carbon Britain without getting electricity from nuclear. [10]

Hinkley Point: 'We've got a great deal [with EDF]'

In October 2013, after more than 18 months of negotiations, Davey announced that the Government was 'extremely close' to finalising terms with EDF Energy for the £14bn programme to build twin nuclear plants at Hinkley Point, Somerset. Despite serious public concerns that EDF had potentially secured a 'strike-price' deal 50pc above the current wholesale cost of power Davey told the BBC’s Andrew Marr Show: 'I’m convinced I’ll be able to look consumers in the eye and say we’ve got a great deal.' [11]

Davey’s older brother, Henry Davey, is a corporate partner and energy expert at Herbert Smith, a leading London law firm with a longstanding relationship with nuclear giant EDF Energy and close links to energy companies such as Centrica and BP. The firm is a member of the Nuclear Industry Association lobby group.[12] Its website declares it is ‘proud to be at the vanguard of next generation nuclear in the UK’.

Henry Davey has been reportedly involved in briefing reports on Feed-in Tariff cuts for solar power and UK electricity market reforms. According to the Telegraph, in 2005 he offered the following diagnosis on the UK’s energy prospects: “The Government urgently needs to address its energy policy as there are potentially serious security of supply issues on the horizon,” he said. “Getting the right commercial incentives for the market to respond to the future challenges, coupled with a clear steer of where nuclear will sit within the long-term energy mix, is essential.” [13]

A DECC statement said: “In accordance with the requirements of the Ministerial Code, the Secretary of State has provided his Permanent Secretary with a full list of his interests, including details of his brother’s employment as a partner at Herbert Smith LLP, which will be recorded and published in the List of Ministers’ Interests in the usual way. Appropriate safeguards are being put in place to avoid any conflicts of interest.” [14]

In an historic reversal of policy, the Liberal Democrats voted to accept 'limited' nuclear power after Ed Davey told members at the September 2013 annual party conference that it would be 'reckless' to rely on coal and gas.

He said: "When I have listened to pro-nuclear Liberal Democrats over the years, there is one argument I have found increasingly difficult to answer and that is the climate change argument.

Climate change poses a real and massive danger to our planet. Not keeping a genuinely low source of electricity as an option is reckless when we don't know the future. We are going to need vast amounts of low carbon electricity to tackle climate change. Why? Because if our carbon capture and storage plans don't work, we may have to replace all fossil fuels for electricity generation, that is about 60% of all generation.

If we do that without nuclear, you will need to replace about 85% of electricity generation. That's huge. [15]

In September 2013 Ed Davey shot down UK Prime Minister David Cameron's claim made the previous month that UK 'fracking has real potential to drive energy bills down'. Pointing out that Britain was only one part of a wider European gas market, Davey said that,

He added that it was, 'far from clear that UK shale gas production could ever replicate the price effects seen in the US", where the shale gas boom has seen prices plummet'.

Davey's statement was in direct contrast to David Cameron, who had written in an article for the Telegraph newspaper:

Just look at the United States: they’ve got more than 10,000 fracking wells opening up each year and their gas prices are three-and-a-half times lower than here. Even if we only see a fraction of the impact shale gas has had in America, we can expect to see lower energy prices in this country.[16]

In 2018, following a series of earthquakes at the Cuadrilla New Preston site in its first month of fracking for the first time in six years, Davey urged the Conservative government not change the safety rules he had introduced back in 2012 on fracking-induced earth tremors. His parliamentary motion stated:

“Since fracking was resumed in Lancashire in October 2018, the safety limit threshold for earthquakes has been breached three times, including one at Preston New Road that recorded eight times the energy of the 0.5 Red light magnitude set by the Government”.

"These fracking companies should pause work if their operations triggered seismic activity at a level of 0.5ML (local magnitude)."