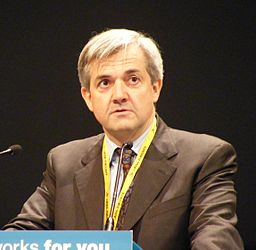 Chris Huhne is a Liberal Democrat politician who was appointed Secretary of State for Energy and Climate Change in May 2010.[1] He resigned this position in February 2012 after he was charged with perverting the course of justice over a 2003 speeding case.[2] He became the first UK Cabinet minister in history to be forced from office by a criminal prosecution.