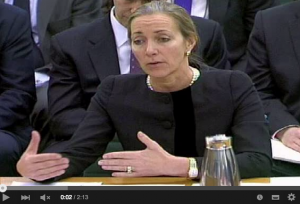 Fairhead in front of the public accounts committee, March 2015

Rona Fairhead CBE is on the board of HSBC Holdings plc and the chairman of the BBC Trust.

Fairhead has held roles as the CEO of the Financial Times Group Limited; finance director of publishers Pearson plc; executive vice-president, strategy and group control of Imperial Chemical Industries plc; chairman and a director of Interactive Data Corporation; a non-executive director of The Economist Newspaper Limited; and a non-executive member of the board of the UK Cabinet Office.

Fairhead left her role at the Financial Times after being overlooked for the top job at Pearson - the parent company of the newspaper. She received a payoff of around £1.15 million, which caused great unrest among the shareholders.[1][2]

As well as her roles with HSBC and the BBC, Fairhead is also a non-executive director of PepsiCo Inc. and by invitation from the Prime Minister a British Business Ambassador.[3] She currently works 25 days a year at PepsiCo Inc.[4]

Fairhead joined the board of HSBC in December 2004 and is currently an independent non-executive director, member of the financial system vulnerabilities committee and nomination committee. She is also chairman of the HSBC North America Holdings Inc.[3]

In 2014 Fairhead was nominated by culture secretary Sajid Javid to succeed Lord Patten as the chairperson of the BBC Trust - the governing body of the BBC. She is the first woman to hold the role.[6]

In February 2015 HSBC were embroiled in a tax avoidance scandal, where it was revealed the Swiss subsidiary of the bank were helping clients, including some of the richest men and women in Britain, to avoid tax laws. [7]

Members of the HSBC board, including Douglas Flint and Stuart Gulliver and Fairhead, have been questioned by the public accounts committee. Fairhead insisted no evidence of tax avoidance at the Swiss bank had been brought to her attention during her ten years on the board of the bank. She placed the blame on tax avoiders, the Swiss bank's customer relationship managers and its in-country managers.

Margaret Hodge, chair of the public accounts committee, has urged Fairhead to resign from her role as chair of the BBC Trust or to be sacked by the government.[8]

'I want to come to you, Ms Fairhead, and I’m going to say something. It’s a bit unpleasant to say, and I’m just saying it as a licence fee payer. Having watched your performance this afternoon I’ve got to say this to you, that either you knew... or you didn’t know. And in that case you are either incredibly naive or totally incompetent.