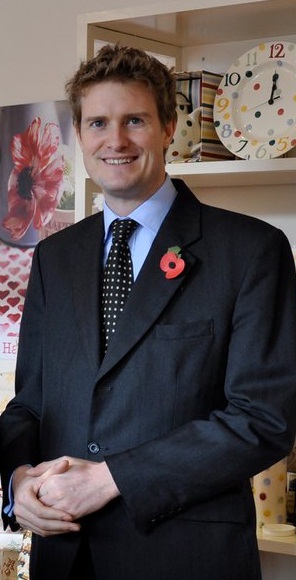 'Tristram Hunt (born 31 May 1974) became the UK member of parliament (Labour Party) for Stoke-on-Trent Central in May 2010. He is an historian, writer and broadcaster, who worked for former prime minister Tony Blair and his spin doctor Peter Mandelson in a press office and 'rapid rebuttal' capacity. He was also special adviser to David Sainsbury and has been described as a 'long-term protege' of Sainsbury.[1] Hunt has worked for or been a trustee of a number of pro-market ‘centre-left’ think tanks including Demos, IPPR and the New Local Government Network.

After the 2015 general election he was announced as the shadow education secretary.[2]

Hunt initially attended ‘a state primary school, Milton Road in Cambridge’[3] until his ‘family moved to North London’[4] at which point he attended the elite University College School in Hampstead.[5] Hunt gained a First Class degree in history from the University of Cambridge (1995), before serving as an Exchange Fellow a year-long scholarship at the University of Chicago (1995-6).[6]

After his spell with New Labour in 1996-7 (see below) Hunt returned to Cambridge 'to complete his doctoral thesis on Victorian civic pride (2000).'[6]

On his return from Chicago, Hunt worked as a 'researcher' for Demos the New Labour associated think tank where he contributed an essay 'It takes more than a village' to The Return of the Local publised by Demos in 1996.[7]

In September 1996, at the age of 22, he joined the New Labour spin apparatus and:

became an idealistic tea-boy in Tony Blair's Labour Party press office... ‘Tea-making was literally what I was doing at the start, in what was then a very small office. Everything got bigger and more exciting in the run-up to the 1997 general election, of course, and I was seconded to Millbank to the rapid rebuttal unit.
We operated at the dirtier end of the campaign's political street-fighting, and soon became re-branded as the attack unit: “Wheels coming off John Major's Tory lie-machine!”’ [8]

He says he ‘was brought to its Millbank nerve centre by Peter Mandelson. "I wouldn't say I was Peter Mandelson's protege, although I'm a great fan of his. I worked in the press office and I can't emphasise how lowly I was. I was making tea - but not even tea for Tony, because I wasn't nearly important enough for that."’[9]

After the party's landslide victory, Hunt ‘co-wrote the encomium to New Labour, Blair's 100 Days, with the notorious former spin doctor Derek Draper. "It was terrible," chuckles Hunt. "I love Tony Blair; I think he's great, but in 10 years' time, academics will analyse it as an example of complete Blairite euphoria. It's full of gasping lines like 'Tony lifted a cup of tea to his lips and said, Alastair' It really has to be read to be believed." [9]

Hunt also worked for New Labour on the 2001 election.

Hunt was involved in the setting up of the Science Media Centre and was a member of the initial Advisory Council which was set up in late 2001 'to establish the broader vision of the SMC and to raise the running costs'.[10] He may have been acting for David Sainsbury though he had – according to his own website - ceased to be a special adviser to Sainsbury in the year 2000. In November 2001 in the run up to the launch of the SMC Hunt penned a promotional piece on the SMC:

While much of society is now media-savvy, science has been left behind. Groups opposed to scientific research are always there to take the call. And scientists have shown a masochistic lack of interest in public debate; their preferred medium is the rarefied pages of peer-reviewed journals such as Nature. Scientists have a proper concern for the discipline of their method and are wary of speaking out before their thesis has been tested by colleagues… heavy. Pressure groups talk in the black- and-white language loved by reporters; academics are usually more diffident.

Scientists have been further scared away from public engagement by the media frenzy around GM technology in 1999, science's annus horribilis. The reduction of a complex branch of biological engineering to "Frankenstein food" was typical of media hopelessly ill equipped to discuss scientific progress rationally. And into the vacuum stepped big business. What inflicted the greatest damage on GM science was that the case for the defence was fronted by the bio-tech groups Monsanto and AstraZeneca.[11]

Hunt did not disclose his role in advising the SMC, however.

According to the Morning Star Hunt continued to act as spokesman for David Sainsbury until he was elected an MP in 2010.[1]

Hunt was an Associate Fellow at the Centre for History and Economics, King’s College, Cambridge before joining Queen Mary, part of the University of London in 2001. Between 2001-2010, ‘Tristram combined his post as lecturer in history at Queen Mary with work as a history broadcaster, presenting over fifteen radio and television programmes for the BBC and Channel 4. In addition to making regular contributions to The Guardian and The Observer, he is also the author of The English Civil War: At First Hand (2002), Building Jerusalem: The Rise and Fall of the Victorian City (2004), and the award-winning biography, The Frock-coated Communist: The Revolutionary Life of Friedrich Engels (2009).’[6]

Since entering Parliament, Hunt has ‘focused on the regeneration needs of Stoke-on-Trent; the ceramics industry and energy intensive sector; educational excellence; constitutional reform; and the Labour Party policy review.’[6]

Between April 2014 and April 2015, thirteen members of the Labour Party received a total of £597,404 in secondments from the big four (PricewaterhouseCoopers, KPMG, Deloitte and Ernst and Young). During the time Hunt received two secondments worth £100,905 from PwC.[13]