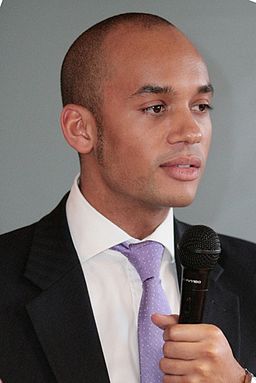 Chuka Umunna is the Labour Party MP for Streatham and the shadow secretary of state for business, innovation and skills.[1]

After the 2015 general election and Ed Miliband's resignation as Labour Party leader, Umunna announced his intention to stand as party leader and was quickly installed as the bookies' favourites. However, three days later, Umunna withdrew from the race to become leader claiming he was not ready for the scrutiny and attention that would be on him and those close to him. Reports have said that the reporters have been seen following Umunna's mother and even trying to get interviews from his girlfriend's 102 year-old grandmother.[2][3]

According to the Daily Mail, Umunna is a member of complimentary members-only club M Den, situated behind the Bank of England. According the website, M Den is somewhere where members 'can get up to mischief' and is an invite only club where no membership fee is required. Reports even claim Umunna has one of 50 electronic entry keys, which allows the owner to enter the club through a door on the upper floor of the restaurant called M and that the company are opening a new pop-up bar in the summer called 'Chuka bar'.[4]

In November 2015, Umunna was appointed to the membership of the Home Affairs Committee. [7]

Between April 2014 and April 2015, thirteen members of the Labour Party received a total of £597,404 in secondments from the big four (PricewaterhouseCoopers, KPMG, Deloitte and Ernst and Young). During the time Ummuna received two secondments worth £68,050 from PwC.[9]