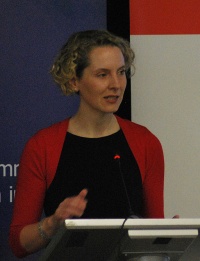 Emma Reynolds is a Labour Party politician who has been the MP for Wolverhampton North East since 2010. [1] After the 2015 general election she was announced as shadow communities and local government secretary.[2] She was previously the shadow minister for housing in Ed Miliband's shadow cabinet.[3]

She was appointed to the membership of the Health Select Committee in November 2015. [4]