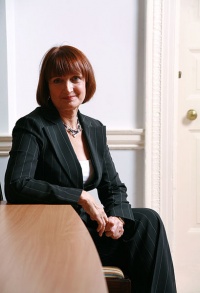 Dame Tessa Jowell is the Labour MP for Dulwich and West Norwood. She was Secretary of State for Culture, Media and Sport from 2001 to 2007.[1]

She is married to David Mills.

The latest register of members interests show that Jowell received £10,000 from consultancy firm Incorporated London for 'providing advice on strategy and project development' as a senior adviser to the firm for approximately three days during October to December 2014.[2] The firm was set up by Godric Smith, Tony Blair's official spokesman between 2001 and 2004, and Greg Nugent, a former marketing director for the London Organising Committee of the Olympic and Paralympic Games. It refuses to reveal it's clients, but one is thought to be Gatwick airport who are looking for help with the political battle for a second runway. Jowell's association with a company who do not provide any transparency has been criticised by the PRCA director general, Francis Ingham, who said: 'Every PRCA member discloses the names of all of their clients and all of their staff on a quarterly basis. If you're ashamed of you clients; ashamed of your staff; and refuse to sign up to a code of conduct, you shouldn't expect to curry much public confidence.' APPC chairman Iain Anderson said: 'Our approach at the APPC is clear – you can’t be a policymaker and a lobbyist. That’s why we operate a strict code of conduct which has transparency as its hallmark.'

Jowell has said: 'My role is to provide advice and support to the founders rather than to work with their clients. I will also be undertaking mentoring and development with their young staff members.'[3]

In July 2015 it was announced that Jowell had joined the Chime Specialist Group, part of international marketing group Chime Communications, as its non-executive chairman.

On her appointment, Jowell said:

'I am delighted to take up this newly created role and work with consultants and communications experts who share my view that the greatest opportunities exist where businesses create reciprocal benefit for customers and the communities in which they operate.'[4]