MBDA is a multinational group and a world leader in missile systems with nearly 10,000 employees across Europe and the USA. 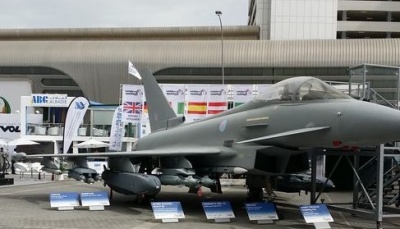 MBDA has three main shareholders in defence and aeronautical systems – the global arms company BAE Systems (37.5%), Europe's largest aerospace firm in Europe EADS (37.5%) and Italy’s second-largest industrial group Leonardo-Finmeccanica (25%). In 2010 the MBDA website reported a turnover of 2.6 billion euros and production of over 3000 missiles. The group works with over 90 armed forces worldwide. [1] 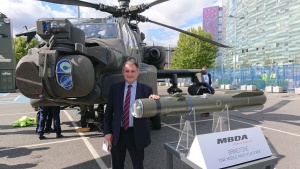 Conservative MP Jack Lopresti poses next to the MBDA's deadly Brimstone missile at DSEI 2017 in London.

MBDA was created in December 2001, after the merger of the main missile producers in France, Italy and Great Britain. Each of these companies contributed the experience gained from 50 years of technological and operational success. The restructuring of the industry in Europe was completed with the acquisition of the German subsidiary EADS/LFK in March 2006. This further enriched MDBA’s range of technologies and products, consolidating the Group’s position.

The company produces the deadly Brimstone air-launched ground attack missile, which has been sold to Saudi Arabia and used over Yemen.

MBDA currently is leading a consortium to develop a high-energy laser weapon for use on both land and sea under a £30M contract for the MoD. The UK Dragonfire group consortium includes MBDA, QinetiQ and Leonardo-Finmeccanica.[2]