Air Commodore Simon Moss is a former senior civil servant at the British Ministry of Defence (MOD), now working in the private sector for missiles developer MBDA where he is head of 'portfolio capability development'.

Moss was a former director of helicopters at the Defence Equipment and Support, the MOD's procurement agency. He was a speaker in that capacity at the London arms fair Defence and Security Equipment International (DSEI) 2015.[1]

MBDA's shareholders are BAE Systems, Airbus and Leonardo-Finmeccanica. The company produces the deadly Brimstone air-launched ground attack missile, which has been sold to Saudi Arabia and used over Yemen. 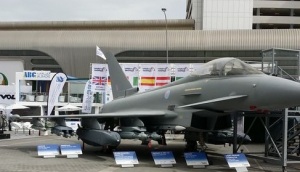 MBDA currently is leading a consortium to develop a high-energy laser weapon for use on both land and sea under a £30M contract for the MoD. The UK Dragonfire group consortium includes MBDA, QinetiQ and Leonardo-Finmeccanica.[2]