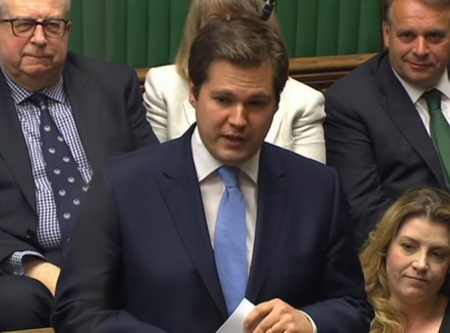 Robert Jenrick is the British Conservative Party Member of Parliament for Newark in Nottinghamshire.

Jenrick was appointed secretary of state for housing, communities and local government in July 2019. He replaces James Brokenshire, who resigned after Boris Johnson's party leadership victory to replace Theresa May as PM.

In his new role, Jenrick takes on responsibility for decisions on whether to overturn local council refusals of planning permission for IGas' shale gas site in Cheshire and Ineos' Woodsetts site in south Yorkshire.

In February 2015 Jenrick served was parliamentary private secretary (PPS) to Esther McVey in the Department for Work and Pensions and in May 2015 he was appointed PPS to Michael Gove, secretary of state for justice.[1]He also served as PPS to Amber Rudd as home secretary.

Jenrick's constituency includes eight oil and gas licence blocks, awarded by the Oil and Gas Authority under the 14th licensing round in 2015. One was awarded to Alkane Energy (abandoned mine methane vent licence), two to Blackland Park (conventional licences), three to INEOS, one to IGas and one to ADM (conventional). There are plans for three shale wells, two hrz frac wells and 2D and 3D seismic surveying; no applications were underway as of November 2016. [2]

Jenrick has said he supported fracking exploration, saying 'it would be irresponsible not to pursue homegrown sources of energy. We have already seen the positives of fracking in the US, with a drop in oil and energy prices.' [3] His constituents have frequently called on him to take a strong stance against fracking. [4]

Robert Jenrick has generally voted against increased regulation on fracking. [5]

He then spent a year in the USA, studying Political Science at the University of Pennsylvania, before returning to the UK to study law as a postgraduate at the College of Law and BPP Law School. [6]