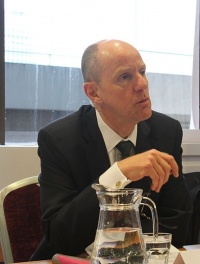 Nick Gibb has been the Conservative Party MP for Bognor Regis and Littlehampton since 1997.[1]

Gibb is Schools Minister in the Department for Education.

Gibb has long been involved in the Conservative Party's reform of schools: Gibb held the post of shadow minister for schools for the five years to the 2010 general election. He was made schools minister in May 2010, a post he held to September 2012. In the subsequent reshuffle, the job of schools minister was handed to David Laws at the request of the other party in the coalition, the Liberal Democrats. Gibb's appointment on 15 July 2014 as Minister of State for school reform was described by Conservative commentators as 'essential'.[2] Gibb was reappointed schools minister after the 2015 general election.

As well as having the obvious job title of minister for school reform, it is clear that Gibb has been central to the Conservative Party's market-based reforms to the UK's education system.

Gibb has been directly responsible for changes to school funding, including the introduction of the 'pupil premium', the current accountability regime, and changes to teaching and school leadership. He is a longstanding advocate of synthetic phonics as a method of teaching children to read, which is now embedded in the school system.

He is a strong advocate of a schools market, and of forcing schools that are deemed to be inadequate to be taken over by independent school operators.

Gibb is a fan of school operator chains, such as Ark, and equivalent charter school chains in the US, such as The Knowledge is Power Programme schools, or KIPP schools, which he described in a speech at the UK's Education Reform Summit in 2015, as 'one of the earliest and best groups of charter schools in the United States'.[3]

He has been a speaker at events organised by UK education reform lobbyists, Policy Exchange,[4] and Reform. For example, he attended an invitation-only Reform dinner in November 2014, giving a speech on the subject of 'education priorities in 2015', to a 'senior group of experts', as Reform described the attendees.[5]

‬‬Gibb’s constituency includes one oil and gas licence blocks, awarded to IGas by the Oil and Gas Authority under the 14th licensing round in 2015. There are plans to conduct 2D seismic surveying; no applications or plans for shale wells are currently underway. [6]

Herbert has generally voted against increased regulations on fracking . [7]

Gibb was formerly a chartered accountant specialising in corporate taxation with KPMG, serving the company between 1984 and 1997. [9]

Gibb was a member of the Federation of Conservative Students at a time when they were influenced by radical libertarian ideas.

He went to school in Maidstone, Leeds and Wakefield before going on to study law at Durham University.