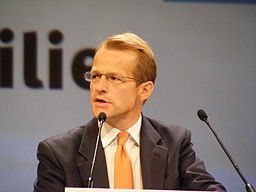 David Laws was a Liberal Democrats MP, minister in the coalition government and is a leading education reformer in the UK.

David Laws became schools minister in the Department for Education, as well as Cabinet Office minister, in September 2012, working with Michael Gove during a period of large-scale education reform in the UK. Like Gove, Laws is a supporter of the marketisation of schools and did not rule out profit-making in schools in the future. He has described education as one of his real passions.

Connection to Paul Marshall and Ark

Laws has a long-standing connection to Liberal Democrat donor and education reformer, Paul Marshall. Marshall is founder of hedge fund Marshall Wace and lead non-executive director at the Department for Education.

The two men co-edited The Orange Book in 2004, in which he argued that the party should not be embarrassed by its economically liberal traditions, and should look beyond “soggy socialism and corporatism” to focus on curbing both state and private monopolies. They were also both co-editors, with Julian Astle and Alasdair Murray of the follow up to the Orange Book, Britain After Blair.

In June 2015 Laws became Executive Chairman of CentreForum, a think tank with a strong focus on education reform. CentreForum is bankrolled by Marshall who is also its chair of trustees.

In 2015 Laws became an adviser to Ark, an academy chain co-founded by Marshall. He is advising Ark on the development of its global education programme, which includes supporting governments in developing countries to improve their schools. Laws said of his appointment: “It’s an exciting time to be involved in global education reform and I look forward to playing my part in the further development of Ark’s international programmes.”[2]

Marshall also donated £15,000 to Laws' unsuccessful campaign to win his seat in 2015, just months before appointing him as an adviser.

Laws was member of Parliament (MP) for Yeovil from 2001 to 2015. He was UK chief secretary to the treasury,[3], minister of state for schools in the Department for Education and minister of state in the Cabinet Office.

Laws lost his seat in the 2015 general election to the Conservative Party's Marcus Fysh by 5,313 votes.[4]

After the 2015 general election, Laws turned down an offer of a peerage from Nick Clegg in the dissolution honours list. Former Lib Dem MPs Vince Cable, Simon Hughes and Danny Alexander are also understood to have turned down the offer.[5]

Having left his post as Minister of state for schools and cabinet office minister in May 2015, Mr Laws sought the advice of ACOBA on the following appointments:

Laws was born in 1965 in Surrey. He was educated at St. George’s College, Weybridge before attending Kings College Cambridge where he received a double first in economics.[8]

He was elected MP for Yeovil in 2001, succeeding Paddy Ashdown. Laws was appointed Lib Dem Shadow Chief Secretary to the Treasury in 2002.[11]

On 7 September 2004, Laws hosted a dinner for PR company Edelman at the House of Commons.[13]

At the General Election in May 2010, David became Chief Secretary to the Treasury as part of the Conservative-Liberal Democrat coalition Government.[15]

On 28 May 2010, the Daily Telegraph revealed that he had been claiming expenses on rent paid to his partner, James Lundie in a possible breach of expenses rules.[16] Laws resigned the following day.[17]

Some Liberal Democrat bloggers suggested that the Telegraph had outed Laws because of its campaign against a proposed increase in Capital Gains Tax.[18]