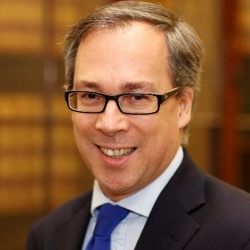 Lord Ed Llewellyn served as chief of staff to the former UK prime minister David Cameron.[1] He had served Cameron since 2005. [2] He played an eminent role in managing Cameron's EU renegotiations in late 2015 to early 2016.[3]

Llewellyn was awarded a peerage under Cameron's honours list in July 2016. [5]

In September 2016, he was appointed Britain's ambassador to France, for which he earns an annual salary of £130,000. [6] He is expected to play a central role in Britain's Brexit negotiations.

Nicknamed "Steady Eddie", Llewellyn attended both Eton and Oxford with Cameron. During the period of Conservative opposition, he was an adviser to Chris Patten (working for him during the 1997 handover of Hong Kong from the UK to China) and worked alongside Paddy Ashdown in Bosnia.[7]

Llewellyn has worked with Cameron for many years, initially as colleagues at the Conservative Central Office after graduation and thus liaising with one another during the 1992 general election. [2]

In May 2010 The Spectator tipped Cameron's chief of staff Llewellyn to be "the new power broker" and "one of the most influential people in Downing Street these next few years". In addition to his good relations with the Liberal Democrats - having been sidekick to Ashdown and also good friends with Nick Clegg's wife, Miriam Gonzalez Durantez, during his time in Brussels - he "has extensive links across government". For example, he has twice worked alongside National Security Adviser Peter Ricketts (in Hong Kong and Bosnia).[8]

In an email to Llewellyn on 10 September 2010, Assistant Metropolitan Police Commissioner John Yates offered to brief the Prime Minister on his examination of the News of the World phone hacking investigation. Llewellyn responded:

On the other matters that have caught your attention this week, assuming we are thinking of the same thing, I am sure you will understand that we will want to be able to be entirely clear, for your sake and ours, that we have not been in contact with you about this subject.

So I don't think it would really be appropriate for the PM, or anyone else at No 10, to discuss this issue with you, and would be grateful if it were not raised please.[9]

Llewellyn's inclusion on Cameron's honours list, amongst many other former political and personal aides, sparked accusations of cronyism and was seen as an attempt by the Conservatives to boost the number of Tory peers in the House of Lords. The list was branded by his former policy adviser Steve Hilton as a the symptom of a 'corrupt and decaying democracy'. [10]

Llewellyn's subsequent appointment as French ambassador raised further concerns, after the The Daily Mail reported in June 2014 that David Cameron had long promised his old school friend an ambassadorship as a ‘thank you’ for his loyalty. [11] His appointment is highly unusual given he is serving Conservative peer, he said however that he would not vote or speak in the Second chamber, nor draw any allowances. [12]