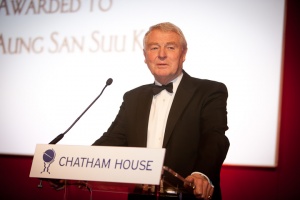 Jeremy John Durham Ashdown, Baron Ashdown of Norton-sub-Hamdon, GCMG, KBE, PC, (born 27 February 1941), commonly known as Paddy Ashdown, is a British politician. Ashdown is the former leader of the Liberal Democrats; until January 2006 he was the international community's High Representative for Bosnia and Herzegovina. He was made a Knight Grand Cross of the Most Distinguished Order of Saint Michael and Saint George (GCMG) in the New Year Honours 2006.

I am convinced that, despite the disaster of Iraq, the international community has an increasingly important role in the world's hotspots.[5]