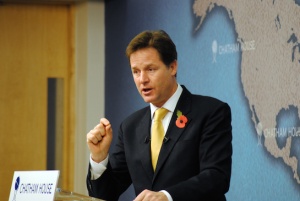 Nick Clegg is the MP for Sheffield Hallam and served as UK deputy prime minister for five years after forming a coalition government with the Conservative Party in May 2010.[1]

Clegg was first elected leader of the Liberal Democrats in December 2007 but stood down after the party only won eight seats in the 2015 general election.[2]

After the 2015 general election, Clegg took up various new positions outside politics. He is now a fortnightly columnist for the London Evening Standard, and an ad hoc speaker for News Presenters Ltd[3] He sought to become a trustee of the Social Mobility Foundation; as he had had dealings with the organisation in office, the roles' unpaid nature and lack of governmental contact meant there would be no clash of interest.

He has also set up the Open Reason Foundation to promote debate and fresh thinking. Following approval from the Advisory Committee on Business Appointments, Clegg became its director in September 2015. [3]

In November 2015, Mr Clegg took on a part-time, unpaid appointment as Commissioner to the Global Commission on Drug Policy, in which he will lead a project which seeks to encourage an evidence based approach amongst European leaders. [3]

In January 2016, having sought the advice of ACOBA once more, Mr Clegg took on a role leading a commission on social inequality with the Social Market Foundation, aiming to tackle inequality in education more specifically. [4]

Nick Clegg authored a comment article in the Guardian in January 2009, entitled We must stop arming Israel: Brown has to stop sitting on his hands, halt British weapons exports and insist the EU do the same. In the article Clegg argued that:

We have a European Union encumbered by clumsy decision-making and confused messages. And at home we have a prime minister talking like an accountant about aid earmarked for Gaza without once saying anything meaningful about the conflict's origins. Gordon Brown, like Tony Blair, has made British foreign policy effectively subservient to Washington. But waiting for a change of heart in Washington is intolerable given the human cost.

Of course, Israel has every right to defend itself. It is difficult to imagine what it must be like to live with the constant threat of rocket attacks from a movement which espouses terrorist violence and denies Israel's right to exist. But Israel's approach is self-defeating: the overwhelming use of force, the unacceptable loss of civilian lives, is radicalising moderate opinion among Palestinians and throughout the Arab world. Anger in the West Bank will make it virtually impossible for Mahmoud Abbas, the Palestinian Authority president, to continue to talk to Israeli ministers.

Brown must stop sitting on his hands. He must condemn unambiguously Israel's tactics, just as he has rightly condemned Hamas's rocket attacks. Then he must lead the EU into using its economic and diplomatic leverage in the region to broker peace. The EU is by far Israel's biggest export market, and by far the biggest donor to the Palestinians. It must immediately suspend the proposed new cooperation agreement with Israel until things change in Gaza, and apply tough conditions on any long-term assistance to the Palestinian community.

Brown must also halt Britain's arms exports to Israel, and persuade our EU counterparts to do the same. The government's own figures show Britain is selling more and more weapons to Israel, despite the questions about the country's use of force. In 2007, our government approved £6m of arms exports. In 2008, it licensed sales 12 times as fast: £20m in the first three months alone. There is a strong case that, given the Gaza conflict, any military exports contravene EU licensing criteria. Reports, though denied, that Israel is using illegal cluster munitions and white phosphorus should heighten our caution. I want an immediate suspension of all arms exports from the EU, but if that cannot be secured, Brown must act unilaterally.

Finally, the world's leaders must accept that their response to the election of Hamas has been a strategic failure. The removal of the EU presence on the Egypt border in response to Hamas's election, for example, has made it easier for the rockets being fired at Israel to get into Gaza in the first place. An EU mission with a serious mandate and backing from Egypt and Israel would help Israel deal proportionately and effectively with the threat from weapons smuggling.

Attempts to divide and rule the Palestinians by isolating and punishing Gaza will not succeed. To secure peace in the Middle East, Hamas must turn its back on terrorism, and help create Palestinian unity. Only unified leadership in the West Bank and Gaza can offer Israel the security guarantees that it rightly seeks. My proposals to stay Israel's hand in this conflict may be unwelcome to some, but they have the country's long term interest at heart. No terrorist organisation has ever been defeated by bombs alone. Only a new approach will secure lasting peace for Israel itself[5].

On the subject of the Digital Economy Bill, Nick Clegg argued in April 2009:

We did our best to prevent the Digital Economy Bill being rushed through at the last moment. It badly needed more debate and amendment, and we are extremely worried that it will now lead to completely innocent people having their internet connections cut off. It was far too heavily weighted in favour of the big corporations and those who are worried about too much information becoming available. It badly needs to be repealed, and the issues revisited.[6]

In September 2013, Clegg expressed 'muted support' for fracking, saying the government could not afford to ignore the potential contribution shale could make to the UK's energy mix. [7] He had previously said that fracking would be difficult to persuade people of the benefits of fracking in their communities. [8]

In October 2014, Clegg said on fracking:

'I don't think we should turn our nose up at a whole new industry or technology. Fracking has a role.'

'New infrastructure happens from time to time, but it needs to be done carefully and not in a cavalier 'slap-dash' manner," he said. That's why I'm proud we've got the tightest regulation of anywhere in the world to ensure fracking - wherever it takes place - is in an environmentally sustainable way'. [9]

Responding to the government's decision to green light fracking in Lancashire in October 2016, Clegg said the move 'sets a very dangerous precedent [...] the government riding roughshod over the will of the local people'. [10]

In November 2016, councillors in Sheffield voted to ban fracking on land owned by the city, and called for a moratorium on fracking. [11]

‬Clegg’s constituency includes four oil and gas licence blocks, awarded by the Oil and Gas Authority under the 14th licensing round in 2015. Three shale licences were awarded to INEOS, and one to Warwick Energy. There are plans for three shale wells, one hrz frac well and 2D and 3D seismic surveying; no applications are currently underway. [12]

Clegg has a mixed voting record on fracking . [13]