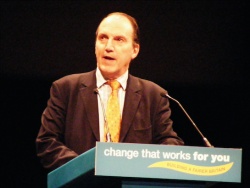 Hughes was appointed a minister of state at the Ministry of Justice in December 2013 the resignation of Lord McNally on his appointment as chair of the Youth Justice Board.[3]

In November 2013, the House of Commons Standards Committee found that Hughes had failed to formally declare six donations worth over £30,000 to his local party , failing to observe the parliamentary 'code of conduct'. Four of them came from IPA Consulting Ltd, one from City Cruises Plc, and one from Southwark Metals Ltd. [4]

The leader of his constituency's council said his failure was 'not just embarrassing for him, it more importantly falls well short of the standards people in Southwark would expect from their MP'. Hughes later apologised , saying he was not 'not as attentive as he should have been to the rules of the House.'. [5]

After the 2015 general election, Hughes turned down an offer of a peerage from Nick Clegg in the dissolution honours list. Former Lib Dem MPs David Laws, Vince Cable and Danny Alexander are also understood to have turned down the offer.[6]

Having left his role as minister of state at the Ministry of Justice, Hughes sought the advice of Advisory Committee on Business Appointments regarding a new position as head of public affairs at the Open University, which he took up in February 2016. [7]