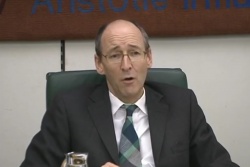 Andrew Tyrie has been the UK Conservative Party MP for Chichester since 1997.

Tyrie was chair of the influential House of Commons Treasury Select Committee from 2010 - 2015.

He has been chair of the Parliamentary Commission on Banking Standards (Joint Committee) since 2012.[2]

Supports fracking, but not in his constituency

In an undercover investigation by Greenpeace in 2012, ‬‬Tyrie expressed strong support for fracking, saying wind energy was a 'complete waste of money', and 'what we need is shale', adding 'we are a very lucky country — we’re sitting on all this stuff.' [3]

In November 2013 however, he opposed a draft application by Celtique Energy to conduct exploratory drilling in his own constituency at Fernhurst, saying:

'I think it is very unlikely that I would find a planning application acceptable in such an environmentally sensitive area, particularly since it would also be very close to a village of 3,000 inhabitants' [...] 'It seems to me that better and less disruptive sites could be found, just as others already have for fossil fuel extraction elsewhere in the constituency.' [4]

In January 2014, Tyrie criticised the government's proposed compensation scheme for communities affected by the fracking, arguing it would incentivise councils to give shale gas companies the green light and cause a 'conflict of interest'. [5]

Tyrie's constituency includes three oil and gas licence blocks, all awarded to IGas by the Oil and Gas Authority under the 14th licensing round in 2015. All three are conventional licenses: there are plans to conduct 2D seismic surveying, but no applications are currently underway. [6]

Tyrie has generally voted against increased regulations on fracking . [7]