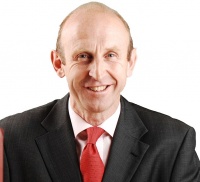 John Healey is a British Labour Party politician, who has been the Member of Parliament for Wentworth and Dearne since 1997, and former minister of state for Housing and Planning.

Following the 2015 leadership election, Healey is currently serving as Shadow Minister for Housing and Planning having worked this portfolio during Gordon Brown's premiership. [3]

‬ Healey's constituency includes three oil and gas licence blocks, awarded by the Oil and Gas Authority under the 14th licensing round in 2015. One shale license was awarded to INEOS, one to IGas and one to Cuadrilla. There are plans for three shale wells, one hrz frac well and 2D and 3D seismic surveying; no applications are currently underway. [4]

In November 2015, Healy met with CEO of Cuadrilla Francis Egan. Healy said of the meeting:

'Local people are understandably concerned after the government announced out of the blue in August that it was issuing these fracking licences. They are rushing ahead, not taking warnings seriously and have watered down environmental and safety standards that Labour pushed for in the Commons. People have got tough questions about any prospect of fracking in our area, and I will be raising these with Cuadrilla.' [5]

Healey has a mixed voting record on fracking. [6]