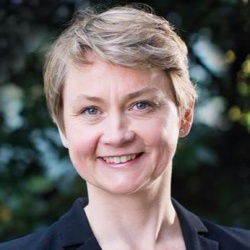 Yvette Cooper is a British politician who has been the Labour Party MP for Pontefract and Castleford since 1997. She currently holds the role of shadow home secretary [1] and shadow minister for women and equalities. [2]

After former Labour leader Ed Miliband stood down on the 8 May 2015, Cooper announced her intentions to stand as the new leader of the party.[3]

Cooper read PPE at Balliol College, Oxford, went on to Harvard University as a Kennedy scholar and the London School of Economics where she took a masters degree in economics. She worked as economic researcher for late John Smith, policy advisor to Bill Clinton Presidential Campaign, policy adviser to Labour Treasury Team, and was an economics columnist with The Independent newspaper.[4]

Cooper is a member of the TGWU and GMB unions. She is married to Ed Balls, a former MP and former key advisor to then Chancellor of the Exchequer Gordon Brown. They have three children.[1]

As Minister responsible for Planning, she played a crucial role in determining whether new nuclear power stations are built.

In May 2007, just days before the Government announced its latest White Paper on Energy, the thisislondon newspaper, ran the headline "Minister is Blasted Over 'Nuclear Cronyism'-

The article went on to say:

Planning Minister Yvette Cooper is at the centre of a 'cronyism' row after it was revealed that her father is a champion of the nuclear industry. Miss Cooper is set to announce controversial plans to help energy firms brush aside objections to new nuclear power stations.

Miss Cooper's father, Tony Cooper,[5] was chairman of the Nuclear Industry Association, which lobbies Ministers on the benefits of atomic power.

Mr Cooper, 63, an ex-union boss, is now director of the Nuclear Decommissioning Authority and has become one of the most outspoken champions of the industry's 'green' credentials."[6]

Yvette Cooper is running against Andy Burnham, Liz Kendall and Jeremy Corbyn to succeed Ed Miliband as the next Labour Party leader.

For her campaign, Cooper has received £81,500 in private donations:

‬‬Cooper has expressed limited support for fracking, saying 'if shale gas can be developed safely, then it could contribute to our security of supply by displacing imported gas in our energy mix'. [10]

Cooper's constituency includes four oil and gas licence blocks, awarded by the Oil and Gas Authority under the 14th licensing round in 2015. One abandoned mine methane vent licence was awarded to Alkane Energy, two shale licences went to Hutton Energy and one to IGas. There are plans for five shale wells and to conduct 2D and 3D seismic surveying, but no applications are currently underway. [11]

Cooper has a mixed voting record on fracking. [12]