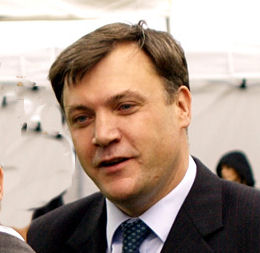 Ed Balls was the MP for Morley and Outwood from 2010 to 2015. During his time in government he was the UK Shadow Chancellor. He is married to the former Labour Health Minister and now Shadow Home Secretary Yvette Cooper.

As a key adviser to Gordon Brown, when he was Chancellor of the Exchequer, Balls was known as the 'Deputy Chancellor'. He worked with Brown in opposition from 1994, coming up with the blueprint for the independent Bank of England and caused a row when Brown made him Chief Economic Adviser to the Treasury, bypassing official procedures.

Balls grew up in Nottingham and went to Oxford University and Harvard, where he studied under Lawrence Summers (who later to become Bill Clinton's Deputy Finance Secretary) and Robert Reich (Clinton's Secretary for Labour). When Summers went to the World Bank, he wanted to take Balls with him, but Balls took a job as leader-writer for the Financial Times. Balls was introduced to Gordon Brown in 1992 and started working for him as economic adviser in January 1994. He took Brown to America to meet Summers, Reich and Alan Greenspan, head of the Federal Reserve. Brown, Balls and Charlie Whelan (another of Brown's former Special Advisers) stayed several times at Geoffrey Robinson's Cannes apartments to discuss their plans. Geoffrey Robinson's penthouse at the Grosvenor House Hotel in Mayfair was another venue for their pre- (and post-) election discussions.

In other secret pre-election discussions with City financiers and accountants Balls came up with the blueprint for the independent Bank of England. In discussions with Labour Party activists and MPs, his view of the economy as a series of models and processes, rather than people and values, led them to ask if he actually believed in anything. Ed Balls caused a row in October 1999 when Brown promoted him from Special Adviser to the job of Chief Economic Adviser to the Treasury, appointing him to the job without the normally strict civil service procedures. He officially remained a Special Adviser, rather than a civil servant.

In May 2005 Balls was elected as Labour MP for the Normanton constituency, which he held until 2015.

He has been a teaching fellow in the Department of Economics, Harvard (1989-90) and a columnist for the Financial Times, Guardian, New Statesman and Tribune

After Brown stood down in 2010, Balls stood for leader of the Labour Party, eventually losing to Ed Miliband.[1]

Under the new Labour leader, Balls was originally Shadow Home Secretary, until 20 January 2011 when he replaced Alan Johnson as Shadow Chancellor.[2]

Balls lost his seat to the Conservative's Andrea Jenkyns by 422 votes in the 2015 general election. The loss of his seat was arguably the shock of the election and contributed towards a poor result for Labour.[3]

After his election defeat, Balls took up a year long unpaid role as an academic researcher at his former university, Harvard University. Balls will be on campus for at least three or four weeks of each term over the year and will cover European integration, international patterns of economic growth, investment, productivity, wages and employment.[4]

Balls himself has said that nuclear 'is not a solution' to energy security problems. He strongly backed the coal industry because he represented 'a constituency with a strong mining tradition and with miners still working in Selby, Kellingley and elsewhere.' He adds: 'I come from an important coal-producing region: I think that a quarter of UK coal is produced in Yorkshire.' [5]

Links to the nuclear industry

Between April 2014 and April 2015, thirteen members of the Labour Party received a total of £597,404 in secondments from the big four (PricewaterhouseCoopers, KPMG, Deloitte and Ernst and Young). During the time Balls received four secondments worth £80,857 from PwC.[7]